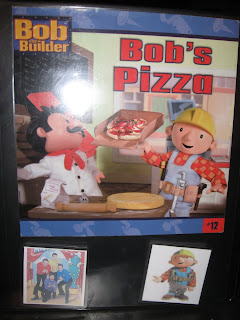 Last year in Kindergarten, Ben was part of a pilot program for a literacy study at the University of North Carolina at Charlotte. His teacher was given specially adapted books to read with her children. The books were enhanced with raised lettering for the children to touch and objects for the children to hold. At points throughout the book, the teacher would ask a question about the page she had just read and the child would choose from pictures or objects inserted in the book to answer the question.

One book Ben read talked about rain. The adapted book came with a small spray bottle and at that point in the book, the reader sprayed water into the air. Ben completed the program in just a few months, quicker than expected. Obviously, he was motivated by the methods they used.

My sister, a creative and can-do person, decided to make a book like this for Ben, using one of his favorites from the Bob the Builder collection. Using the one from school as a model, she tore the book apart, glued the cover to the front of a 3-ring binder. Each page was put in a plastic paper protector and inserted into the binder. She added items to each page that were within the story of the book, such as a bird's nest, toy truck, cat or cell phone and attached them with Velcro.

The story comes alive when objects can be used to demonstrate what is being read. With each page, a question was asked and Ben would answer by choosing between two objects. 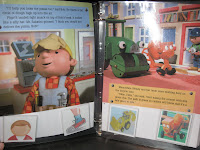 For Christmas, Kim, who has worked with Ben for the last two and a half years, made Ben another one of these books. She used some other techniques: she laminated each page and then put them in a 3-ring binder. She added extra paper to the bottom of each page and attached two laminated pictures with Velcro. After reading the page, a question is asked and Ben can choose his answer from the two pictures. The pictures can be switched with others for an extra challenge. 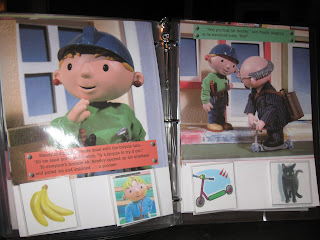 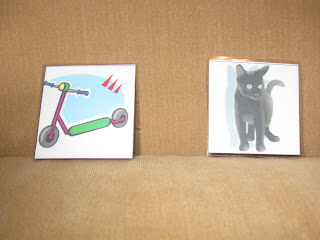 These are two choice cards.

The question may be, "What did the man use to get around the town - the scooter or the cat?"

I believe this pilot program was successful and will be offered to school systems throughout the country at some point. But if you have some time, creativity, Velcro and a book, you can try to make one of these on your own. Depending on your child's interests, abilities and sensitivities, you can design something that will work specifically for them.

Disclaimer: The equipment and tools I talk about in "Gadgets & Gizmos" is not sponsored by any company. This is not an advertisement for any product.