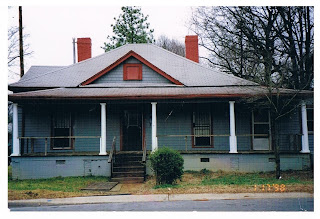 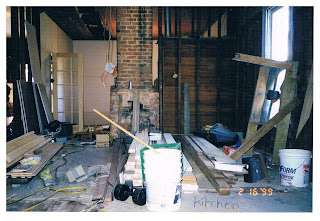 Ryan, and I met in college in 1991, although we did not date until a few years later. Our first years of marriage were spent renovating an 80-year-old home in a precarious "arts district". And when I say renovate, I mean we did all the work and lived in two rooms in the house for five years. We both had full-time jobs too. We had no kitchen or central heat or air conditioning for at least two years. To say the stress of it all was horrendous is not giving you an accurate description. There were some good times, but it was difficult for me to live in carpentry filth, a disorganized mess with uncompleted projects for that long. It took counseling to get us through it all. Although I would never put myself in that same position again, renovating the house ourselves allowed me to stay home with our children...which in so many ways turned out to be what we dearly needed when Ben arrived.
Ryan and I were married five years when I gave birth to Ben in July of 2003. My pregnancy was normal. It had taken us a few years and some fertility drugs to conceive so I was very happy to be pregnant. I enjoyed most moments of it. I signed us up for every class the hospital offered - from diapering to massaging to Daddy Boot Camp. Ryan willingly participated in my every baby whim.
On the evening of July 29, my water broke. We headed to the hospital, got settled in and everything went fine. I think my father-in-law even visited us during labor - I must have been calm to have visitors. As the night progressed, the nurse came in several times to tell me that I needed to change my position because the baby's heart rate was decreasing. She gave me an oxygen mask to wear and my heart rate appeared normal again.
I feel pain really well. So I am not opposed to any drugs that will help that pain diminish. When the anesthesiologist, whom Ryan called Doogie, gave me the epidural, it did not go great. He yelled at me because I moved and for some reason, the pain never really went away. [As an aside, I finally had a great epidural with my third son, so I know what they should feel like.] They gave me lots of drugs to help. I slept for many hours and awoke around 7a.m. - or rather was awoken by this tough nurse.
When I was finally at the last stage of labor, all was going well. They had to give me a quick lesson on the right pushing position because although I had attended every birthing class, I closed my eyes when they showed the videos of women giving birth. I should mention that I am extremely squeamish. Any sight of blood or just talking about blood or procedures involving blood can make me ill to my stomach.
The rest of this has been told to me by Ryan because although I was there, I didn't see what happened. Ben's head came out with the cord wrapped around his neck. When the doctor tried to loosen it, the cord broke. As soon as the rest of Ben was delivered, they whisked him away. I had asked for a clean baby to hold - remember no blood.
They gave him to me - and me being the person I am, I did not notice that Ben's head was about three times the size it should have been. They had all commented at the birth about his hair - all the red hair. So I just assumed, under that little pink and blue cap was a lot of hair. Hey - I was drugged up and I was in love. So in love with this precious little guy for whom I had waited so long.
At this point, Ryan and the doctor had given each other some looks because of the size of Ben's head. Nothing was mentioned to me.
Ben was brought to the regular nursery. Fairly quickly, the nurses were concerned about Ben's head size and did not feel comfortable keeping him. He was brought to the Neonatal Intensive Care Unit. When I am told, I lose it. I am unable to be consoled and unable to go see him. 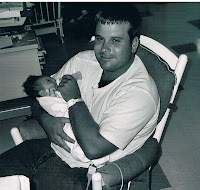 Ryan, and this is where Ryan becomes the amazing father that he is today, spends all his time in the NIC unit feeding Ben and caring for him. He was smitten. Ryan brought me reports on how well Ben was doing. When my mom arrived, I visited our little baby. I had a hard time holding myself together.
After 24 hours, Ben was returned to the regular nursery. The swelling of his head was called molding - from being in the birth canal for so long. He was given a clean bill of health and we took it, no questions asked.
Did I mention that Ben did not have a name yet? We did not know ahead of time if we were having a boy or girl so we had lists of names for both. Ben's full name is Bennett Ryan - which the "Ryan" part came to me in the hospital. The "Bennett" is my maternal great-grandmother's maiden name. Ben could have been a Henry, Jeremy or Joshua, but he really looked like a Bennett to me. The woman running the birth certificate office called every hour to get his name from us. It took us three days to decide, but it was worth the wait to get it just right.
We took Ben home and all was well. Since our renovation was as complete as it was going to get, for the time being, we took advantage of everything we had missed out on for all those years of construction. Ben went to a baseball game within his first 10 days of life, and within the first few months, he had traveled to county carnivals, festivals and the beach. 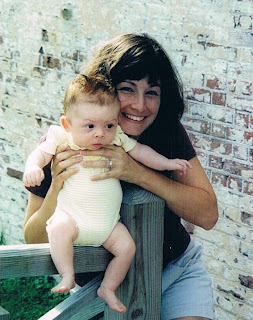 Ben was a good eater and had a good disposition. He had terrible nasal problems that may have made it difficult for him to sleep well at night. Ryan was adept at using the blue bulb to clear his nose. He was a good size baby with lots of beautiful red hair.
We were first-time parents and had no one to compare Ben to. If we had one of our other children first, we would have known something was not right. We were in love with this baby. Our love was blind to those milestones Ben should have been meeting.
At the pediatrician's office, if our doctor said anything, I did not hear it. I now know that we had many more visits than I had with my other two boys. I think the doctor was seeing if things changed over the first few months. About a year later, I reviewed Ben's medical notes from that period of time and the doctor did mention Ben's low muscle tone.
And looking back, my mom may have asked some questions about Ben's development. Ryan's dad and grandmother may have made a few comments too. Again, we were so focused on our love that we did not hear anything anyone said.
But we both must have been processing information subconsciously because when we did acknowledge something was wrong, we arrived at this realization at the same time.
When Ben was six months old, Ryan and I were eating dinner together. Ben was sitting in his high chair. For some reason, Ryan asked me if I ever thought Ben was special. And I said yes.
The next day I saw the pediatrician, not Ben's regular doctor, but another one in the practice. After her assessment and review of the notes, she directed us to a neurologist. I will always remember this doctor because I broke down in the little room. She comforted me saying she was a mom and understood how I felt.
That day started our journey into a new world, so different than what we had expected. Would I do it over if I had to? Unequivocally yes.
And I cannot say that about renovating a house. 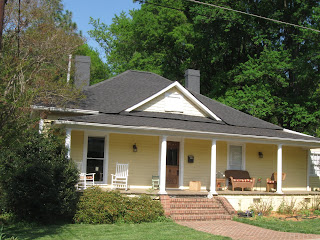 I wish I had more time to write on eSpeciallyBen . Ben teaches us lessons on a regular basis: Smile often, give hugs, sit down and savor the moment, grab someone's hand to let them know you care and laugh with abandon–even if it annoys your brother. Ben will be 18 this summer. He attends high school in-person and enjoys seeing his classmates and teachers each day. In the photo above, it's 6 a.m. and he's can't wait to get on the bus. As for most people, the pandemic has been tough. Ben's in-person activities, camps and programs were canceled. He's happy to see grandma when we met on a Charlotte greenway or park. Ben seeks out social interactions and being quarantined away from friends and family was even more difficult because he didn't understand why. Ben's teacher sends me photos of him throughout the week. They just finished a rousing game of catch here.  Thank you for following eSpeciallyBen. If you want to see what I'm working on now, find me
2 comments
Read more

In October, I received a letter from Social Security Administration saying that Ben no longer qualified for SSI AND we owed a very large over payment for two years of SSI that Ben did receive. The letter showed that we owned two of the same car. I knew this was wrong and immediately wrote a letter. I thought it was a computer glitch. Over the past five months, I have met with Social Security, spoke with several people over the phone and wrote countless letters providing documentation to show the cars we actually owned and filed appeals for the decision to revoke Ben's SSI during the two year period they think we owned these two cars. Tomorrow I have another meeting. I am hoping we can get this straightened out. This situation has caused a lot of stress for us and has taken a tremendous amount of our time trying to unravel the problem. I have not written a post in almost a month, partially because my brain power has been consumed with this issue and the bathroom saga (qualifies
13 comments
Read more

Ben in the middle with Dad (left), Carla Payne with Aging Care Matters and Mom This is the first of several posts about parenting an adult child with a disability. Ben will be 19 this summer; I am learning along the way. As always, I hope to pass on resources and wisdom. Discuss the future.  If your adult child is able to participate in planning for their future, ask them how they envision it. Let them draw a picture. Ask them to tell you a story. Maybe they can sign a few words that mean a lot to them. Find a way to get them involved. How do they see themselves living? By themselves, in a group home, with another family or with a sibling? Where do they want to live? In another city, in an apartment, in a house? How far away do they want to live from family? What level of independence can they handle? Do they want someone to check in on them? Do they want to find a job? Do they need a job coach or supportive employment? Who will help them with their finances? Is there someone they tru
Post a Comment
Read more