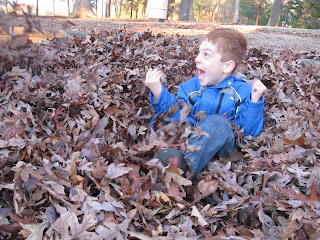 Ben saw some kids at the park playing in a big pile of leaves.
Ben wanted to be a part of it all. They let him join in and even brought over more leaves for him to enjoy. 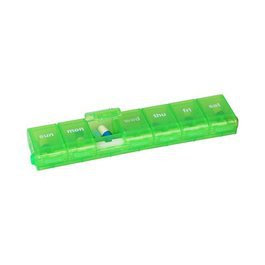 I just bought a new pill box, the one with the days of the week written on each small compartment. It has a button on either end - red to unlock the compartments and green to lock the compartments. As I was filling it and thinking about what a clever gadget it is, I stopped in my tracks and realized the reason I bought a new one was because Ben ripped open the other with his teeth. I just don't think the little button system will stop him from getting into this one.

That will be a job for some engineer, making something Ben-proof.
Posted by VMI at 7:00 AM No comments:

At my parent teacher conference, Ben's new teacher shared a story about him. There is a girl in the class who is in a wheelchair, has very little movement and is completely non-verbal. Since the first day in class, Ben has been interested in her. He reaches for her hand, holds it and makes her smile. From what the teacher said, they have a bond; a friendship has formed.

I know how special Ben is, about his ability to bring people together, but I was still struck by this story.  The teacher spoke about Ben's compassion. Have I ever considered this emotion in Ben? Had I thought him capable? How sensitive and thoughtful is the teacher to see this unfolding in the class and describe it with such love and caring?

Once again, Ben has taught me something new.
Posted by VMI at 7:00 AM 1 comment:

It has been a tough couple of weeks - Ben, for some unknown reason, has not been sleeping. One night, he actually never slept. I mean, he never ever slept a wink. Not once. Other nights, it was not until 3 or 4am that he fell asleep. Some nights he woke at 1:30am and was up for the rest of the evening.

On some of these nights, when I was at my wits end, I gave Ben a sleeping pill or Benadryll, a dose that would normally knock out an adult, let alone a 50lb kid. Alas they did nothing for him. One night, he spent the entire eight or more hours laughing hysterically while watching Bob the Builder movies. Between his cackling and my husband's bronchial coughing, I thought I might lose all sanity.

I tried soothing music, laying down with him in my bed, his bed and on the couch. I gave sleeping meds sometimes and others not. When those ideas did not work, I turned on the TV, then thought it was too much stimulation and turned it off. I locked him in his chair, I kept him out. Nothing worked.

At school, Ben was misbehaving, biting other students and refusing to do his work. For the first time, Ben came home with the Frowny Faces circled, rather than his usual Smiley Faces.

To say frustration was becoming a part of my soul, is to put it mildly. I was beginning to fear the night because of what calamity it entailed. Worse than insomnia is forced awakeness. In my worst moments, I began to think that we would have to send Ben to a place at night that had paid staff that would be awake with him.

Finally, I made a call to the doctor for a sleep study. We have a consultation appointment in December. But of course, Ben has slept soundly the last two nights. And he's happy and rested. He came home yesterday with a constant smile on his face and a great report from school. These photos are from yesterday...I could not help myself. 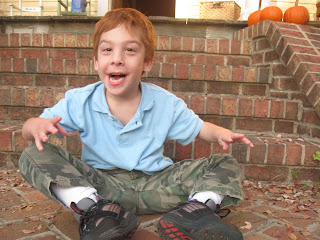 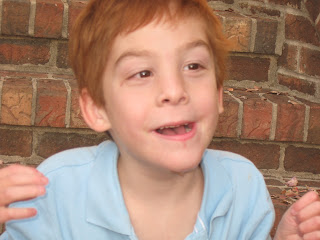 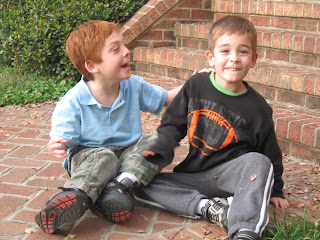 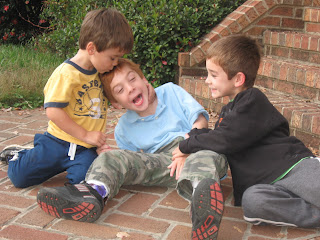 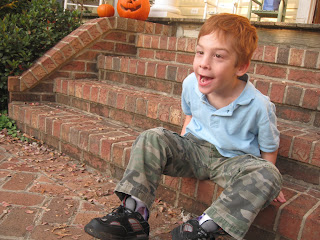 One of our Grin Kid companions, Hayden is in a Halloween Costume Contest. The prize is an Ipad 2, that may help Hayden with his communication. 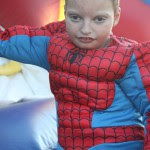 Please take a moment to vote for Hayden in his Spiderman costume - he is a few photos down on the list.

And take a moment to read about Wolf-Hirschhorn Syndrome.

In my other life, you know the one that does not involve making lunches, fighting with light sabers, watching Bob the Builder or anything else that defines my family life, I am trained in working with college students. As a result of working with this population, I became skilled as a leadership and teambuilding facilitator for groups, helping to build teams and increase communication.

During this time, I met Tracy Moore, who did exactly what I did, but at a different university. We hit it off and started to plan teambuilding initiatives with a mission group going to Guatemala. This past January marked our 11th teambuilding retreat with this same organization.

We decided to make our arrangement formal. After much banter back and forth, we came up with the name, AIM Charlotte. AIM represents our hope for the clients we work with and, more literally, Activities with Infanzon and Moore. 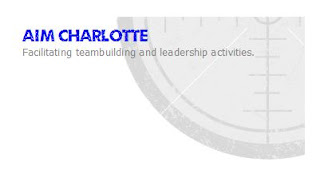 Our three main programs are:

Mission Accomplished - We help church groups going on mission trips to build a cohesive and trusting team before setting out on their journey.

Becoming Your Marriage's EXPERT
We designed a unique six-week course for couples who want to strengthen their marriage, build upon their relationship, and learn more about each other in a fun and low risk environment. Through similar dynamic activities that we use with groups, couples begin to understand their own communication styles and conflict strategies.

Campfire Series
We recognize the need to "stoke the fire", or maintain a team atmosphere with intentional group building activities. The Campfire Series may be adapted for the specific needs of any group from welcoming new colleagues, building trusting relationships or developing conflict management skills.


In addition to these programs, we plan retreats, consult on group dynamics and leadership structure, or run brainstorming sessions. AIM can also customize a program based on the group's needs.

To check us out, our website is http://www.aimcharlotte.org/. We have a Facebook Page and we are on Linked In too. Any help getting the word out is appreciated!
Posted by VMI at 7:00 AM No comments:

I took Ben grocery shopping with me to WalMart. I had this brilliant idea to have Ben in his Convaid Stroller and attach bags to the back that I would fill with groceries. Then as the bags filled, I would bring them to customer service where my cart was waiting. By my third trip to customer service, I was tired of the process. It was a long walk pushing a wheelchair, carrying jugs of milk, only to return to the same section to get more heavy items.

Just as I was ready to give up the fiasco, a WalMart staff person came over and offered to find another staff person to walk with us and push a cart to hold our groceries. Hallelujah!
Posted by VMI at 2:36 PM 3 comments: