More than One Diagnosis 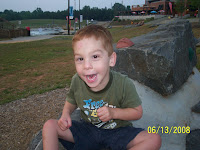 After two brain scans, genetic testing, three neurologists, a developmental pediatrician and Duke Children’s Hospital, we gave up on the idea of a label for Ben's disability. About 25% of children with special needs supposedly have a “non-diagnosis.” We were fairly comfortable in this category. Plus the searching was getting expensive, disappointing and tiring.

On our fourth neurologist, we hit the jackpot. I brought Ben’s 2 MRI scans with me. Before seeing us, the doctor reviewed them. The neurologist walked into the room with a few brochures and said, “Ben has hypoplasia of the corpus callosum.” The doctor explained about the organizations involved in research and support, and she suggested we sign Ben up for the study in California. I read the brochures and sure enough, Ben fit.

Hypoplasia of the Corpus Callosum in plain language means the bundle of 200,000 nerves that connects your left and right brain (corpus callosum) is thin (hypoplasia), about 60%.

For some reason the other neurologists noticed the thin bundle of nerves and told us about it, but did not acknowledge it as the cause for Ben’s delayed development. No one ever spoke about the ACC Network or the research in California. To this day, I wonder how so many doctors were unaware of ACC.

It seems that typically functioning people could have a missing corpus callosum, called Agenesis of the Corpus Callosum or ACC. Others may have partial ACC, or p-ACC and again be functioning normally. It is because more MRIs of the brain are taken nowadays that we even have this information.

The adults and children diagnosed with some form of ACC (agenesis, partial or thin) may have other disorders as well, complicating the ability to figure out what exactly ACC affects. Some people with ACC may develop at a slower rate than their peers and may have small delays. Others have severe physical, communication or cognitive delays. So there is no set prognosis, and there is not enough research on ACC. Ben is a part of the study in San Francisco where they are doing extensive research.

Ben’s neurologist suggests that he probably has some other genetic disorder in addition to the thin corpus callosum. Right now, we have made the decision to direct our financial and emotional resources toward intervention strategies and therapies, rather than expensive and sometimes inconclusive genetic testing.

Ben’s development is severely delayed; however, he makes steady progress in most areas. Ben uses a walker at school to get around and picture cards to make decisions and communicate his needs. His receptive language is far superior than his expressive, although he makes his needs known one way or another. As with any family with a child with special needs, we take everything day by day, celebrating the successes, high-fiving the progress and moving past the failures...nope no failures here, just places that can be changed, improved and made better. ACC or not, Ben is our kid, that's his main label.

Included are links to some ACC sites. They will do much better job of explaining the details of the disorder and its intricacies:

Since this post was written in 2009, more work has been done to pinpoint Ben's exact diagnosis:

The Allusive Diagnosis
Drugs and Other Drugs
Getting Cozy with my Genes
In 2015, Ben was diagnosed with MECP2, a genetic mutation. It changes nothing about his treatment. He continues to be a happy and determined fellow.

Ben met Doodle today. One of the staff at his day program brought him in. Ben loves dogs and these photos made my day.
Post a Comment
Read more

Ben in the middle with Dad (left), Carla Payne with Aging Care Matters and Mom This is the first of several posts about parenting an adult child with a disability. Ben will be 19 this summer; I am learning along the way. As always, I hope to pass on resources and wisdom. Discuss the future.  If your adult child is able to participate in planning for their future, ask them how they envision it. Let them draw a picture. Ask them to tell you a story. Maybe they can sign a few words that mean a lot to them. Find a way to get them involved. How do they see themselves living? By themselves, in a group home, with another family or with a sibling? Where do they want to live? In another city, in an apartment, in a house? How far away do they want to live from family? What level of independence can they handle? Do they want someone to check in on them? Do they want to find a job? Do they need a job coach or supportive employment? Who will help them with their finances? Is there someone they tru
Post a Comment
Read more

"Parenting an Adult Child with Disabilities" is a series on eSpeciallyBen. As Ben approached 18, it was clear our role changed as parents. We needed to help Ben transition into adulthood. These stories are meant to assist other families who face, or will face, some of the same challenges. Talking About the Future Guest Post - Matt Wilson Legal Guardianship, Medicaid and SSI Researching Group Homes Questions to Ask at a Group Home Visit Referral Packet for Group Homes Getting Assistance from a Care Manager From Group Home Placement to Discharge Reaching for Independence
Post a Comment
Read more