I write this, in hopes that the feeling of being emotionally drained will dissipate. I attended a meeting coordinated through North Carolina's Department of Health and Human Services. The meeting's purpose was to listen to feedback from parents, caregivers, providers and consumers about the Innovations Waiver and other services through IDD Services (Intellectual and Developmental Delays) and Mental Health.

The Innovations Waiver is a program designed to help parents keep their IDD or mentally ill child at home and out of an institution. Ben has been part of this program for about 4 years. With state and county money, he receives managed care in the form of direct service providers that help with personal care and skill-building activities in the home and community. There is a long wait list to become part of the program, typically taking years to get the services.

Reluctantly, I went to the meeting with the only incentive being that my long time friend, Karen, would be there. We don't see each other often enough so this was an opportunity to see her. 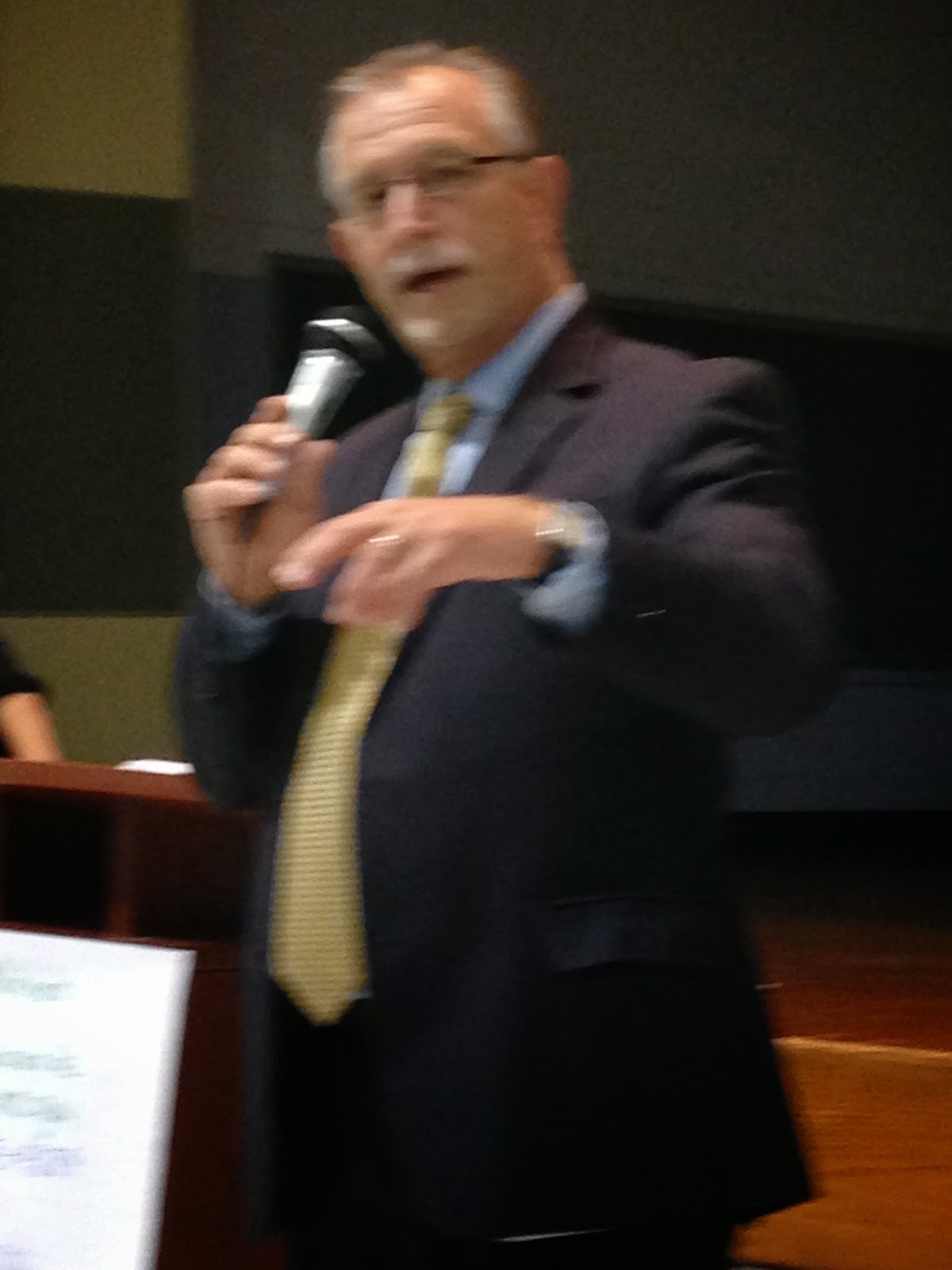 The newly hired Deputy Secretary of Behavioral Health and Developmental Disabilities Services, Dave Richards, started the meeting. A personable and patient man, he seemed to be genuinely interested in hearing what everyone had to say. He gave guidelines for our comments - no personal stories allowed and let's keep it nice. In general, he was looking for system wide changes and ideas for the future. He had staff there recording these suggestions and listening to the problems shared.

About 100 people were in attendance. Most were women, seemingly mothers with children with IDD or Mental Health Issues. Most were white women in their 50's and 60's. There were a few black women of the same age range present. The black women came forward to speak at a higher rate than the white women.

Not many men were present and not one man spoke.

Most everyone who had something to say had the opportunity. The meeting lasted over two hours.

Emotion
Many of the mothers spoke of their adult child in their late 20's or early 30's who had severe issues, some with both Mental Health and IDD issues. They had been in the system for years and had seen the many changes in programs, services, staffing and support. Overall, they were angry, hurt, bitter and sad. Their stories were heartbreaking. Each told of how they loved their son or daughter, how they tried to support them and may have given up a lot in their own life to help their child achieve some sort of happiness. Many had been lost in the system with paperwork glitches, unhelpful staff or changes in qualifications.

Some spouted out statistics, lawbook codes and judicial cases. Others explained that the policies in place were illegal. The anger spewing from their stories was evident. The hurt, they wore on their faces. The years of bitterness, they wanted to spread to the rest of us. I felt like new meat, several wanting to initiate me into their darkness.

It was hard for me to listen to each new mom that stood up. The room was thick with negativity. I did not want to be a part of this group of people. I felt separated from them. I wanted to be separate from them.

As I drove home, I thought about each of the women and their stories. Would that be me in 15 years time?

Perspective
Just before I left the meeting, another woman spoke. She shared that she had a 32 year old daughter with special needs. Early on, she had been told that her daughter would not accomplish much in life. This same daughter holds a masters degree now. The mom said she understood the emotions of the people in the meeting; however, her belief was that  the focus must be on solutions. Anger and upset without support groups that strive for action would not accomplish much. The negative energy of the group was not helpful. The woman's words fell on deaf ears. This group had been through the system and delivered upside down.

I feel blessed to have Ben in the Innovations Waiver program. It is paid through taxpayer money, it is approved through state government and not every state provides this type of support. We have had a generally good experience with the people who administer the programs, and I believe that most have good intentions.

Unfortunately, we don't all have good experiences. I am not sure why. Is it education? people skills? not understanding the system? time? lack of 3rd party advocates? miscommunication? or are there more sinister things going on behind the scenes? It does not seem fair and equitable for some to have an enriched experience while others fall through the cracks.

I struggle with all of these issues, knowing that right now, I only have the physical and emotional energy to help Ben.

Although there was a lot of pain and emotion shared, many ideas were gleaned from the complaints. 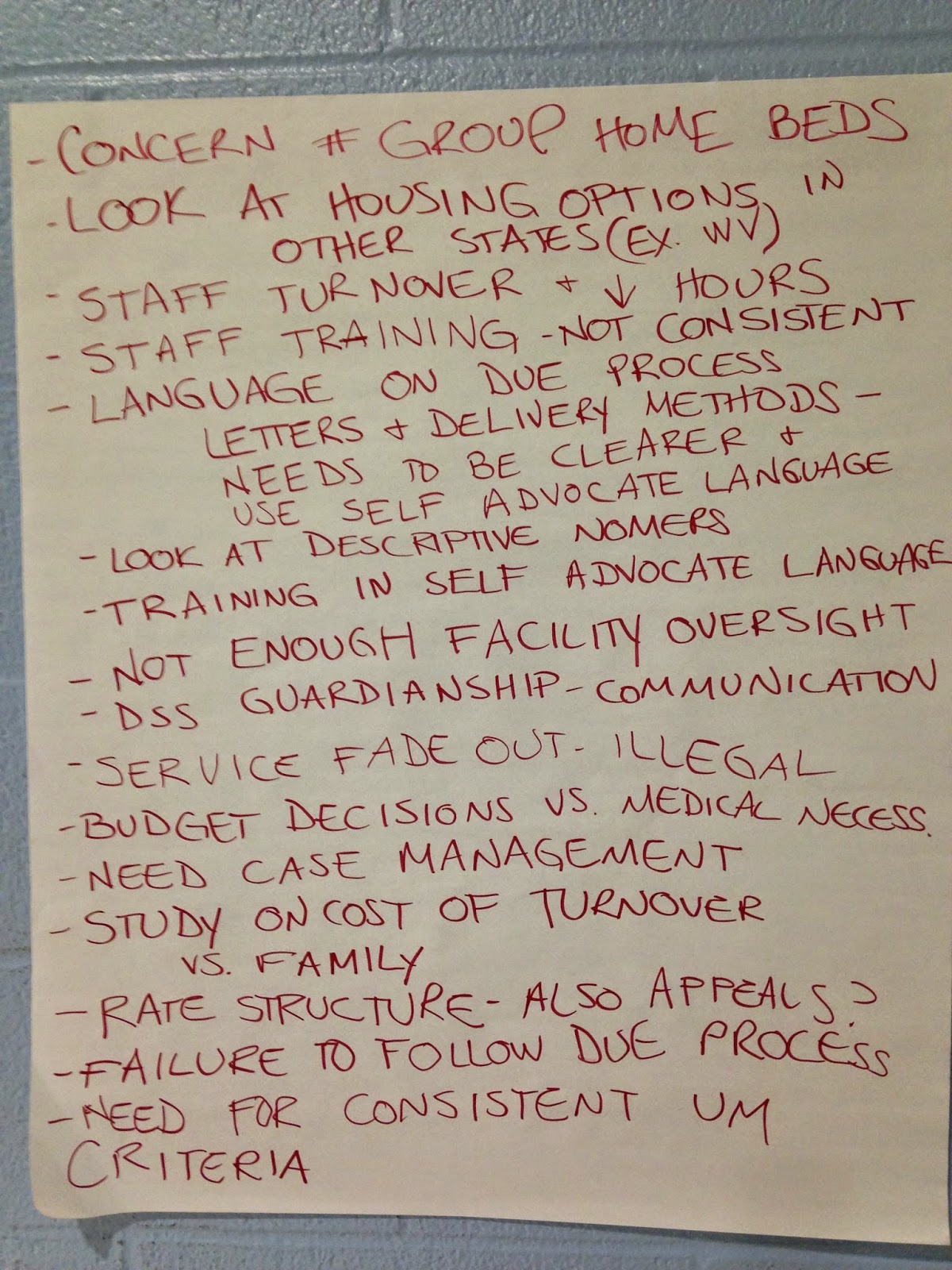 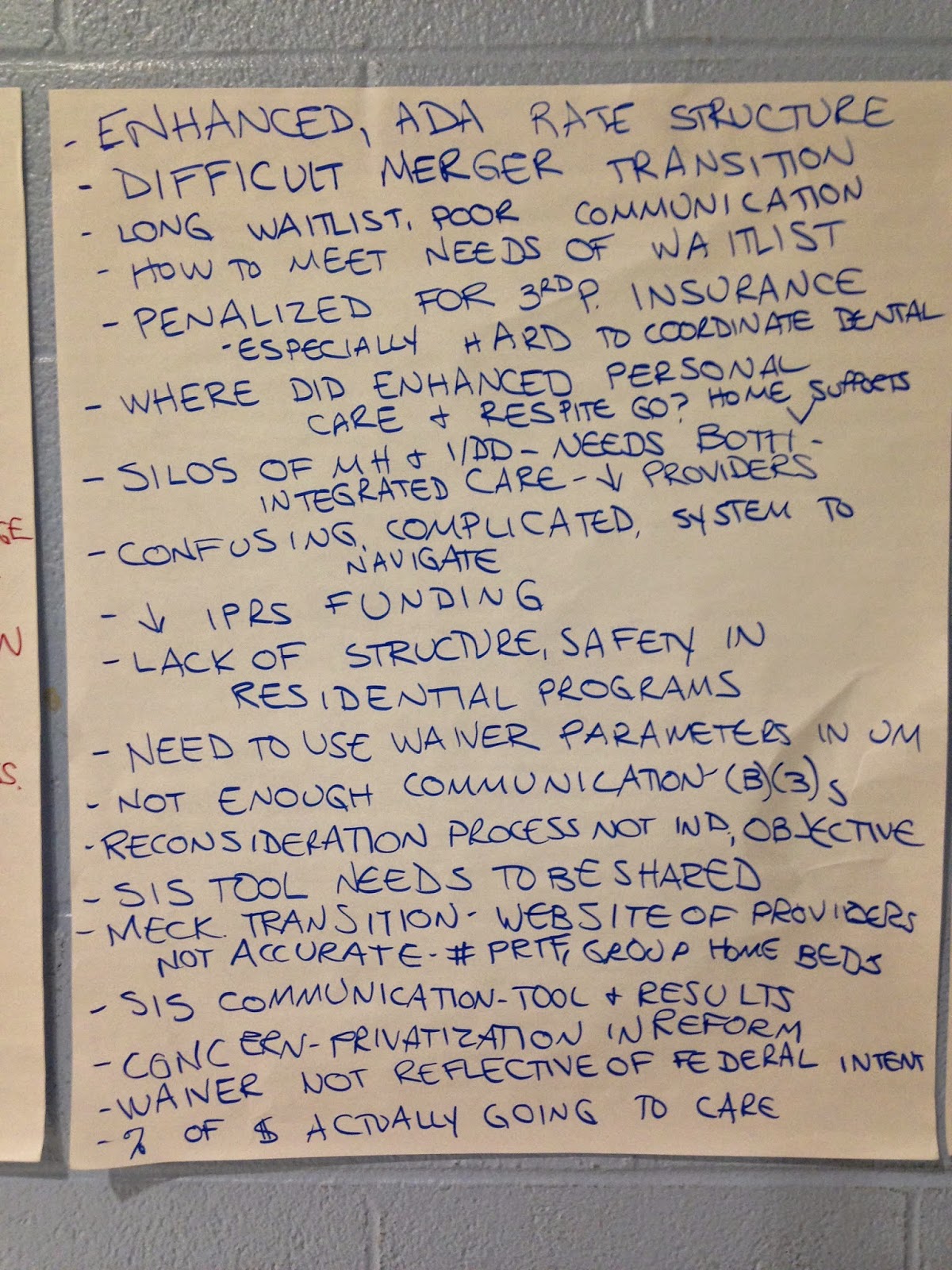 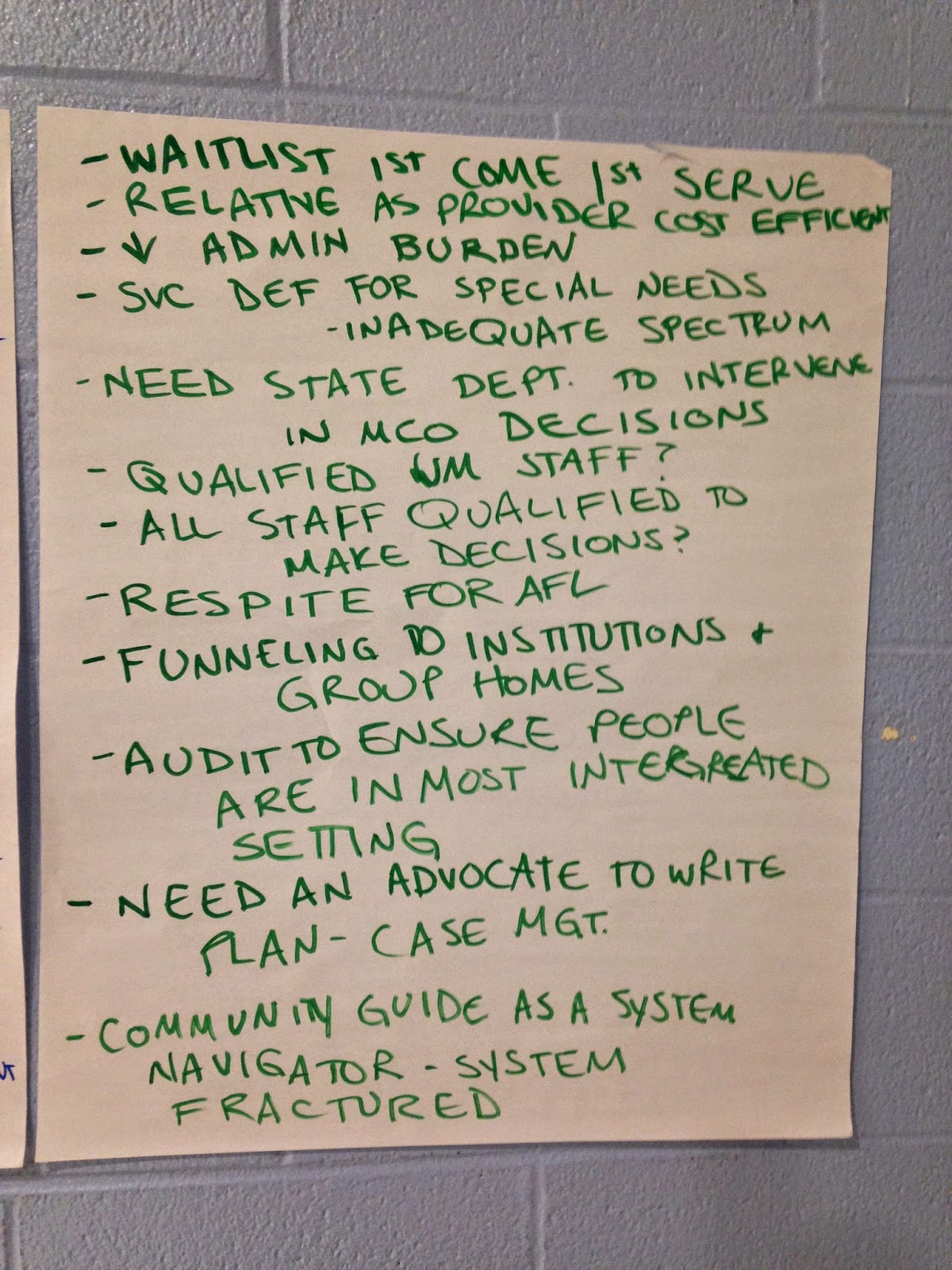 Dave Richards has a long history of working for people with disabilities. I do hope that his heart and mind are in the right place and that he will carefully lead his department in the direction of providing clear and equitable programs and services for the people who need them. I add him to my prayer list - he has a heavy task ahead of him. 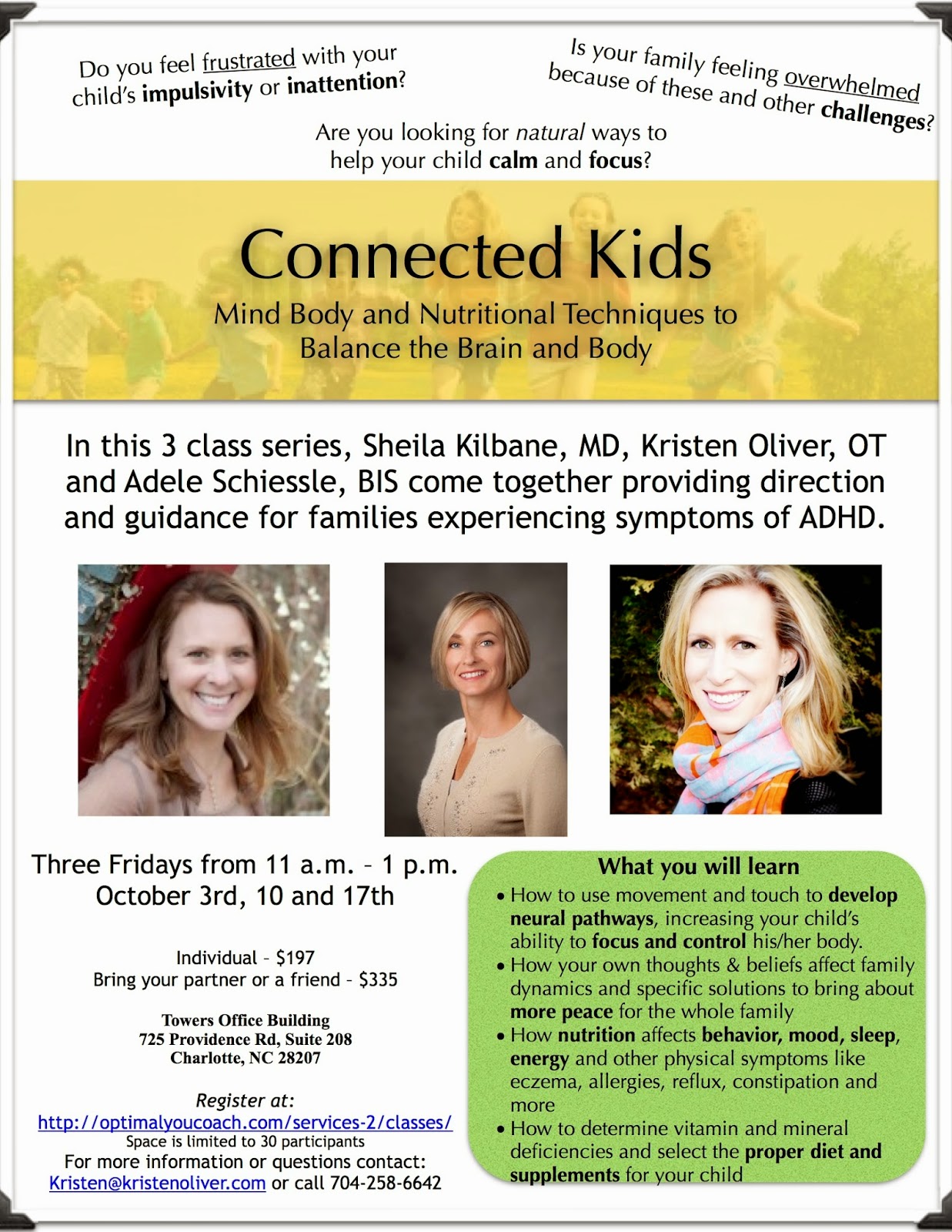 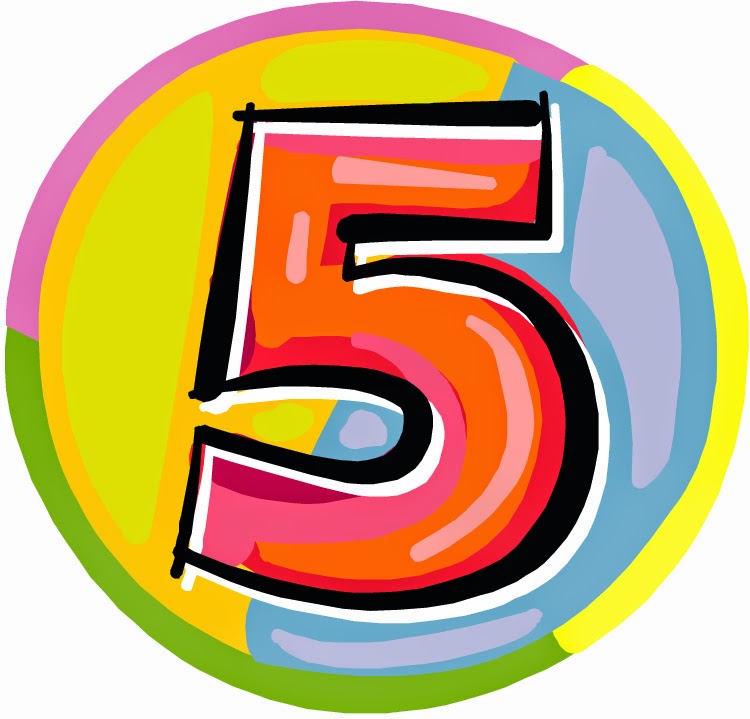 Five Years
When I started, it was 2009; Ben was six years old, Logan was four and Sean was one. My first post, Love at First Sight, was an "all in" jump. I stayed up well past my bedtime, writing and creating a name for this site. It posted on September 18 at 11:43pm.

At that point, I did not have any long-term goals or expectations for the blog. I knew I wanted to write, wanted to share and for as long as I had something to write about, I would keep doing it. That was it. Not much more thought went into it.

Good Stuff
Five years later, I could not have imagined the outcomes from writing eSpeciallyBen. We have this incredible record of Ben's progress, helping us to see patterns, changes and growth. We made connections across the world with people who care about similar issues. My confidence in my writing increased and I sought out paid writing opportunities. We have become closer with distant relatives who came to know us through eSpeciallyBen. And for close family members, they were able to see me through a different lens, helping them to understand my emotions (that I have them) and everyday battles and successes.

Spreading the Word
The About.com Reader's Choice Awards from 2011 increased my readership quite a bit, and I would like to continue broadening eSpeciallyBen's audience. To do this, I need your help.


Here are a few ways for you to help:

1. Share your favorite post on Facebook with a quick intro.
2. Email this blog with a short introduction to a friend or two, or a hundred.
3. Tweet or share eSpeciallyBen on Pinterest.
4. Share this blog on your blog. I would like to do the same, just give me a heads up.
5. If you have not signed up for the email version or RSS, please do so. This ensures that you receive the post as soon as it is available.

Thank you for all your support. Whether you are a new or long time reader, I appreciate you reading about our family's journey with a really neat kid, named Ben. Thank you for the comments and emails too.

** Wherever you see "Ben" in this post, I linked one of my favorite posts to it. If you are new to eSpeciallyBen, this will give you a starting off point.

For the past several years Ben has had therapy everyday after school. This meant he missed out on park time with his brothers. If therapy was cancelled, we rejoiced because Ben could join us. This year, I rethought therapy time and managed to have therapists come later in the day or meet us on the playground.

His new occupational therapist, Maggie, has met us at the park on a few occasions. Ben pet a dog, swung on the swings, ate a snack, rode his tricycle, played with bubbles and tried holding onto the monkey bars. He used his NOVA Chat to make choices about what activities he wanted to do.

This has been a great way to reenergize therapy, involve other kids and help Ben strengthen his skills. 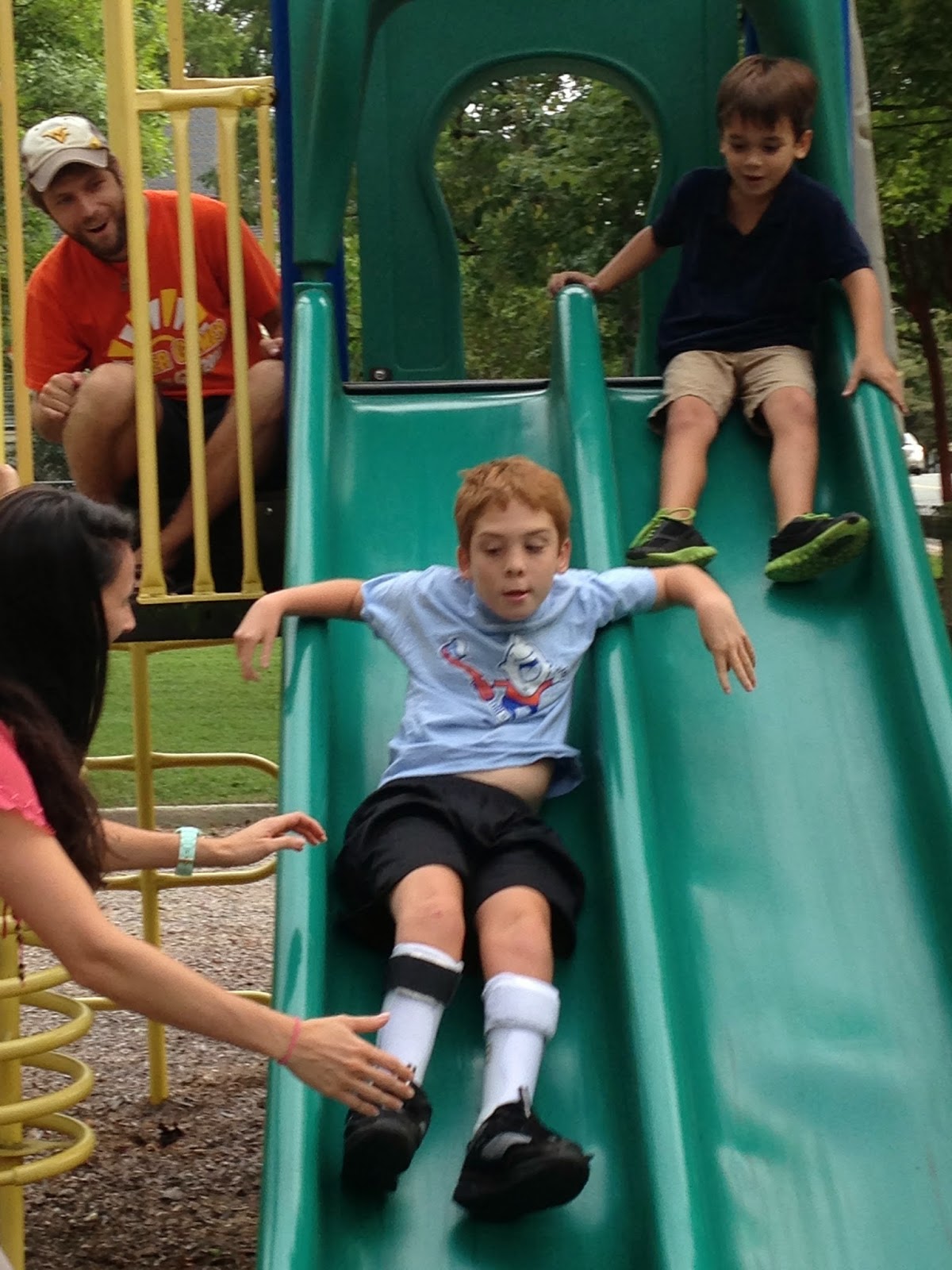 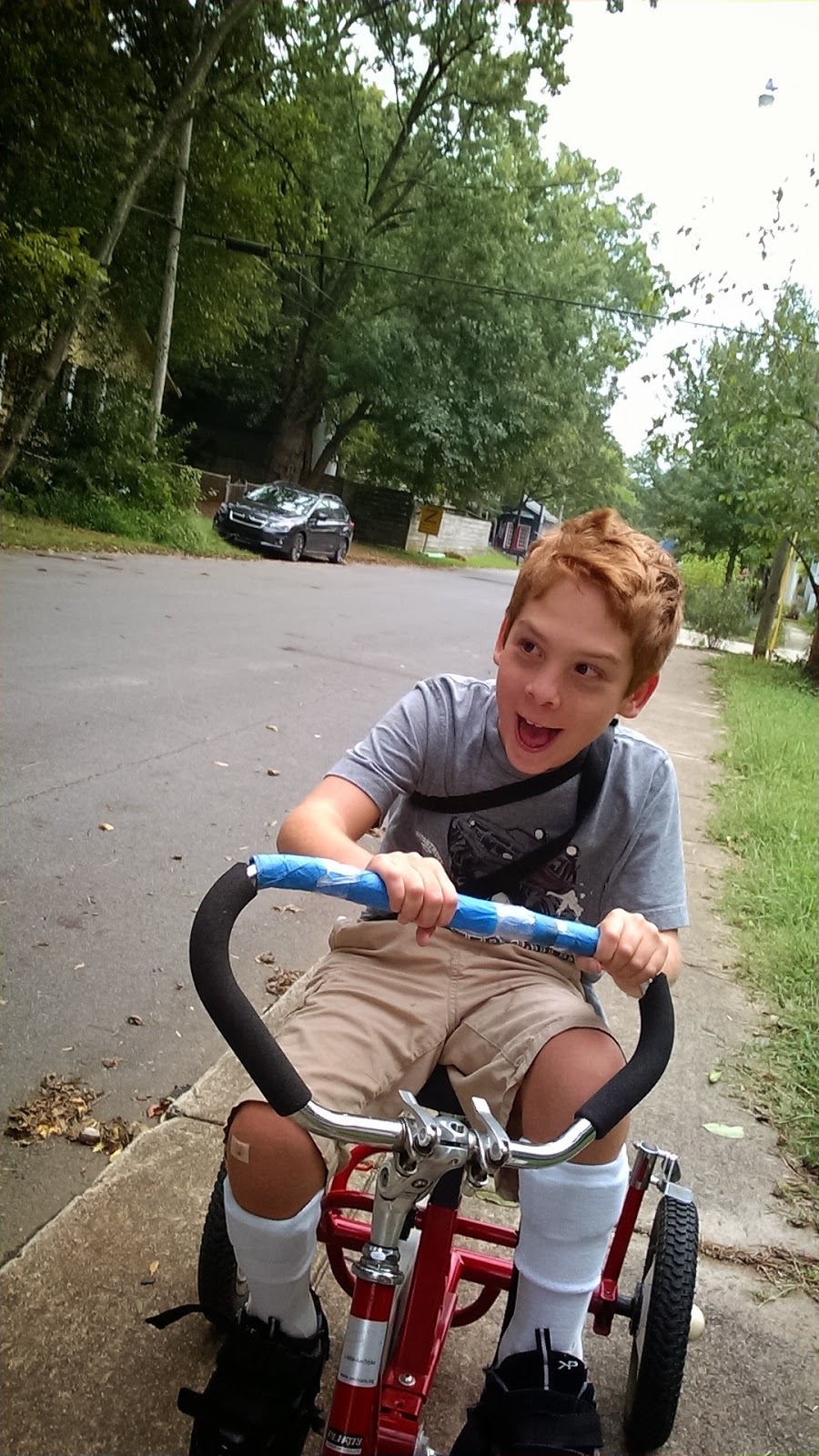 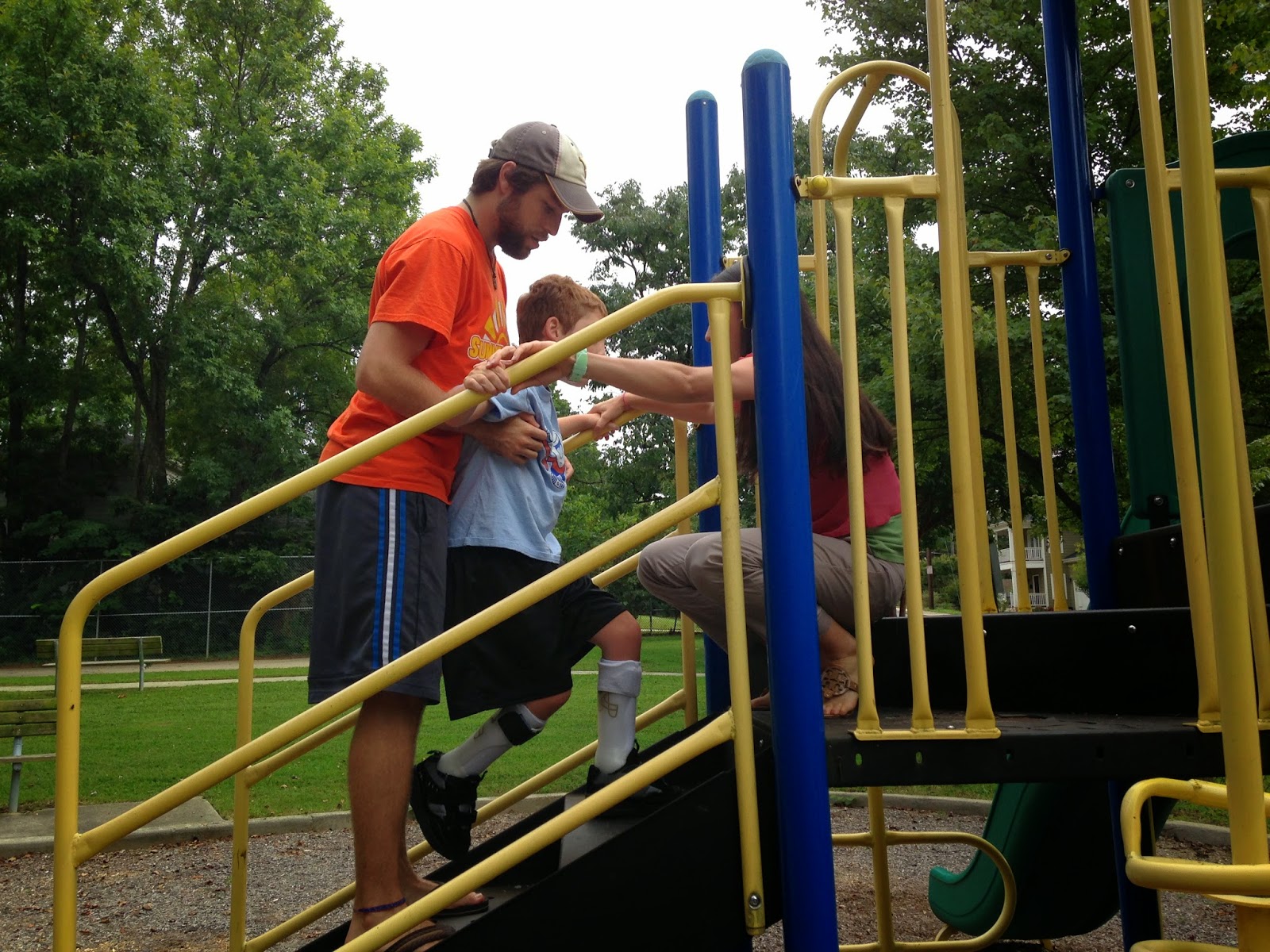 You ask, What is Parkour? 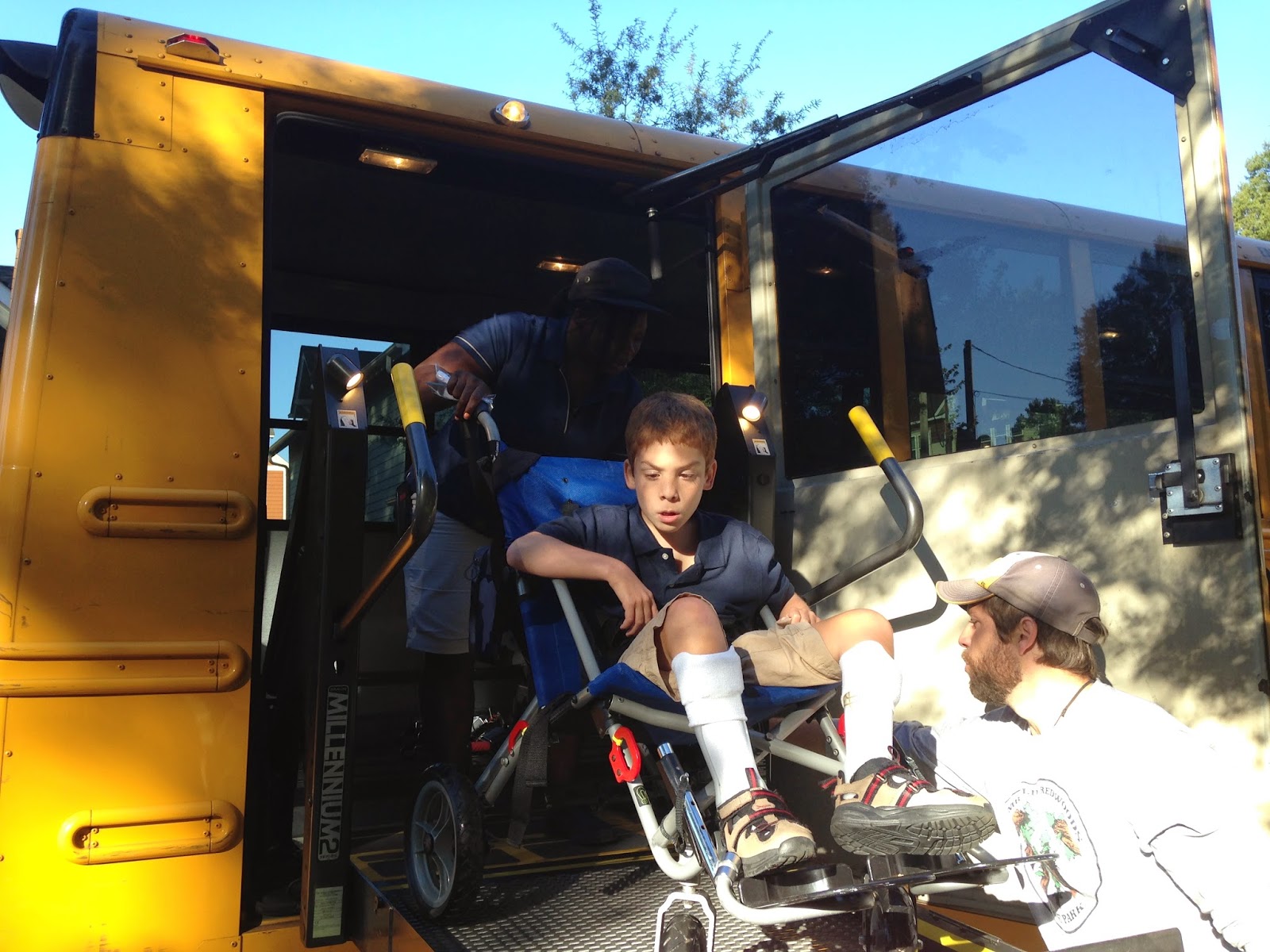 It has been a tough transition for Ben from summer fun to school work. Last week, when the bus arrived at our house, there were no excited hands and feet jumping about. The lift carried a confused boy, wondering what happened to those carefree days of swimming, movie watching and lots and lots of time with the brothers.

On the first day of school, Ben came home with brother withdrawal. He could not get enough of them after school, attacking them with his rough hugs any chance he got.

Assuming that Ben would be exhausted from a day of school and therapy, I was excited for some early nights to bed. Wronger I could not have been; he stayed up between 11pm and 1am each evening. I did not count on this transition, but with Ben's increased awareness, I should have.  Anyone going from an easy summer of fun to a rigorous schedule of school and therapy would find the change a challenge.


Ben's new neurologist ordered a 30 minute awake EEG, a fairly routine test for people with epilepsy. I brought reinforcements in the form of Kim and Bob. Kim is Ben's longtime caregiver and Bob is his favorite character on the Bob the Builder show. Even with backup and distractions, they brought in another technician to hold him down. Ben dislikes anything on his head, and so he fought to take the wires off his head and kicked to try and get off the bed.

We had called ahead to ask about using a papoose, but we were told that they no longer provided one, but they could provide us with sheets to use. Kim was the ingenious one and wrapped Ben like a burrito.

Something I did learn through this process was about Clinical Seizures and Sub-Clinical Seizures. Ben has both - his clinical seizures are atonic and this means they are characterized by head drops. The atonic seizures have been controlled with medication since May 2012. On this EEG, the technician did notice frequent sub-clinical seizures, which are most likely normal for Ben. I will ask more questions about this when we get the results in a few weeks. Most likely this EEG will provide the doctor with a baseline for Ben's brain activity and will not give us much additional information.

Overall, Ben did a great job and did not suffer all that much. The technicians were quick, and it was all over before we knew it.