January 07, 2010
If someone had told me that I would do the following things on the first day of the year 2010, I would call them crazy.

But I did, and I do think I am crazy. 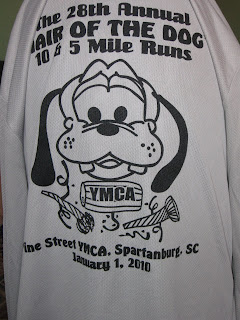 Hair of the Dog was my first race of my 12 Race Challenge for 2010. The race was coordinated by a YMCA in another state, about an hour and a half south of us. I chose this race because it was the only one in January relatively close to our home - and it was warmer when I was planning this challenge.

The race itself had about 100 participants, many wearing t-shirts from previous Hair of the Dog Races. This was the 28th Annual. It seems to be a big tradition with the regulars in this town.

The course took us through beautiful neighborhoods with older bungalow style homes, a nature preserve and also crossed over creeks and old railroad tracks. It was the best course that I have run thus far. But it also could be that I knew Panera Bread breakfast was waiting for me when I finished.

To sum it all up: My husband's last words before we left to go home were, "Are we signed up for next year?"