Whose fault is it anyway? 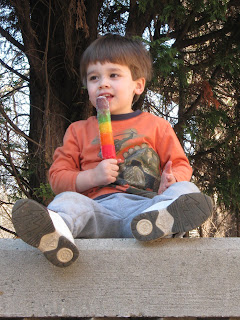 Sean and I were having an exceptionally difficult afternoon together. Whether it was lack of sleep on his part or bad time of the month for me, we were at each other's throats. It was time to get Logan from school which requires a 1/2 mile walk. Sean refused to get his shoes on. After several attempts, a lot of yelling from both of us, a slap on the hand (his not mine), I told him I was leaving. He ended up putting his own shoes on and following me out of the house. And for those of you wondering, no, I did not have a Plan B if he decided not to follow.

We did not speak the entire walk. As we got closer to Logan's school, I, of course, felt guilty about yelling and slapping Sean's hand. I decided to break the ice, be the bigger person, as they say. Yeah, I know, I am the mom.

So I said, "Sean, I feel badly about fighting with you."

Sean turned to me and ever so sweetly said, "Mommy, it wasn't your fault. It was my fault."

Never underestimate your children, they observe, feel and love in ways we cannot completely comprehend.