Ryan is now 13. I have a teenager in my house – a teenager who is more like a 6 year old. Ok, so are most teenagers, but not all the time. I think this is the hardest part of having a special needs child - for our family right now. But, Ryan makes up for this in so many other ways.
Ryan has Down syndrome. He is very friendly, happy and likes to show off. He is a go with the flow kind of kid 95% of the time. He likes trains (and the subway in DC), Disney movies, red boots, taking walks and annoying his younger sister. He loves going to visit his grandparents who live on a chicken farm! To mention his “granmmmmmommy and grandddaddy" always makes him smile and the fastest way to make him mad is to tell him it is time to leave the farm.

Ryan is a busy young man. He is proficient at the Wii swordplay game and “practices” every morning before school. After school, he attends a church after school program where he plays with peers and does his homework. He is always happy to see me and quick to tell his friends “Seeya laler, bye everybody!”

It is funny to listen to Ryan talk and suddenly understand a word or catch on to what he is talking about. I am sure I have been blessed out plenty of time, but did not know what he was actually saying. Believe me; he can get his point across when he wants to. And, he is the best defense against telemarketers. Ryan loves to answer the phone and will “chat” away with whomever he thinks he is talking to. If you ever call my house and he answers, you can hear me in the background – “Ryan, give me the phone!” and his response “Hushshhh Mom! In a mimumte.”

Ryan has trouble with crowds. Not necessarily crowds of people, but crowded events – the circus, school assemblies, play theaters (but not movie theaters). He becomes very anxious and MUST go to the bathroom, sometimes not quick enough. It can be very frustrating to get tickets to something that I think he would really like (circus) and spend most of the time in a bathroom, trying to get him out of the stall. It took me several years to make the connection between crowded places – especially unfamiliar ones – and Ryan’s toileting accidents. Now, we avoid situations like this as much as possible and I am better prepared (usually) when we are going to be involved in something that might be crowded.

When my husband and I look back over the last 13 years, it is hard to believe this kid had 2 heart surgeries before he was 4 months old, took almost an hour to drink a bottle, had texture issues with food and did not eat solid food until he was 4 and still does not communicate in “emergency” situations (I need help). I do not remember the fear during his surgeries, but experience a new fear every time we “lose” him while out in public (he likes to wander off/ not stop when we do). It is hard to allow Ryan some independence and let him walk ahead because he likes to be first and still rein him in when we want to stop to look at something.
My favorite thing to do with Ryan is to give him a camera (thank goodness for digital) and let him carry it around. When he is done, I like to download the pictures and watch the slideshow. This can sometimes take a while as you go through 200 pictures (taken within 2 hours), but it is very interesting to “see the world through his eyes” – but be aware of all the up close chest, back and dog part pictures. And the funny thing is, no one seems to mind having their picture taken by a special needs child. 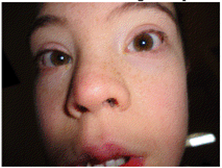 eSpecially Parents is a monthly series featuring nine moms with amazing stories to tell. To catchup, read more here.
Posted by VMI at 7:00 AM