I think I will start a resume for Ben - he's been in videos about Kindergarten readiness and literacy, and now, he is here modeling a special cut out desk. Who knows who might coming knocking next?

But when a friend told him about how special-needs children require special desks and the problem she was having finding them for students in the Charlotte-Mecklenburg school system, he understood. And then Ligon had a light bulb moment. He was already involved with woodworking as a hobby and had made several pieces of furniture over the years. Why not build the desks for the children? 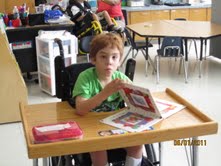 Now, at least once every year, he delivers a batch of solid-oak desks for students. He’s built more than 150 over the last decade.
“What started as a hobby went to a ministry and then a small business,” said Ligon, Hydro Central lead coordinator and 35-year Duke Energy employee. “It’s still a ministry. I didn’t know it at the time, but one of the first desks I made went to a girl in my church who was paralyzed because of a car accident and in a wheelchair.”


What’s so special about these desks and why won’t regular ones do? 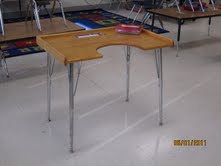 Ligon’s friend, the head physical therapist in the school system, explained that special-needs children who have certain medical, physical and emotional conditions often require desks that will stand up to a lot more wear and tear than normal. The desks the school system had been ordering were not holding up well.
“When she explained the situation, it all made sense to me,” Ligon said. “They were spending money on stuff that would tear up.”
That’s unlikely with Ligon’s desks. He fashions them from solid-red oak boards. They’re about two-by-three feet and include features such as foot stools, circular cutouts to accommodate wheelchairs sliding underneath and rounded edges, which are safer for the students.


The desks are so sturdy, they don’t need replacing. The school system will sometimes ask Ligon to refinish the tops, which can become worn over time, but that’s it.


After paying for materials, Ligon makes little money from the endeavor. But then, money was never the point.


His motivation comes from something far deeper.
Posted by VMI at 7:00 AM