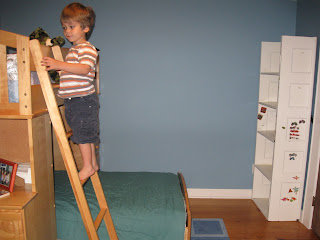 Sean has had an extrordinary few weeks. He sleeps on the top bunk of Logan and his new bunk beds, he is wearing underwear and using the potty regularly. And with my own regret and excitement, Sean is calling Logan, "Logan" and not "der" for brother. In a matter of weeks, he has changed so much.
Sean does not miss an opportunity to tell anyone that he is a big boy. Strangers, friends and family members are all told that he sleeps "top" and "go potty". His excitement to be seen as a big boy is overwhelming.
Logan made the rule that when Sean reached 20 times using the potty, he would get underwear. That special day came last week, on one of the final days of school. At pickup, Sean ripped down his shorts and announced to Logan that he was wearing underwear while pointing to his bottom which was covered with Lightening McQueen.
Today at the YMCA childcare, Sean used the bathroom there. When he saw their specially designed child-sized toilet, he thought he was too big for it, so he knelt in front if it to use.
So tonight, he gets a special treat - ice cream at the local coffeehouse with his Dad. He's just one step closer to manhood.