Wrench in the Plan 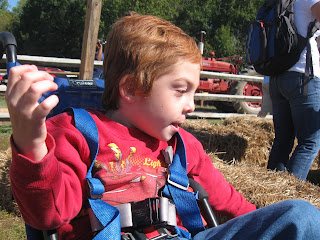 Since Ben's seizures started last spring, it really has been a long and painful process. Always taking Ben's health for granted, I had no knowledge of seizures or their effect on someone. Ben had been making tremendous progress with his gross motor skills. There is a definite difference since the seizures began and medication started. He seems less motivated to walk holding our hands, use his walker or even try to stand. It could be the medicine makes him sleepy or unmotivated. It is hard to tell.

Although we have tried a few different medicines in differing doses, Ben continues to fall forward. This unexpected falling puts a wrench in how Ben spends his day. At school, he can fall out of his walker or while sitting in a chair, hitting his head on the table in front of him. At home, while crawling around, Ben can lose control and hit the floor with his face. He has no control when it happens and cannot put out his hands to stop. When riding his new tryke a few weeks ago, he fell forward at least 30 times banging his face on the metal bar each time. In the last few months, bumps and bruises are continuously on his face. His teacher calls me often to make me aware of accidents at school.

Because Ben's safety comes first, changes have been made at home and in school. He has more support in the walker at school. We rely on the stroller more at home. The school is now asking if they can use a wheelchair for transitioning from lunch and specials. In many ways his independence has diminished and his motor skill development is at a standstill.

In December Ben is scheduled to have a Video EEG at the hospital. The staff will connect him with sensors that will read brain activity while he is in the hospital room. They can watch his physical actions through the video monitoring and compare brain activity through the EEG. We will be there at least 24 hours, but could be longer if they do not get the information needed. They want to see if the falling forward is indeed seizure activity.

It is easy to forget where Ben was just a year ago, doing so well in his walker and TAOS. Even in the beginning of the summer, he was starting to peddle his tryke on his own. The forward progression has slowed because of the seizures and the way they need to be managed.

I worry that this downward trend is permanent. It makes me very sad and angry. I am not ready to see Ben in a wheelchair full time. I think that is giving up on him. Perhaps, in time, I will see it as his best option for mobility. But I am not there yet.
Posted by VMI at 7:00 AM