Bumps, Bruises & a Stitch Here and There 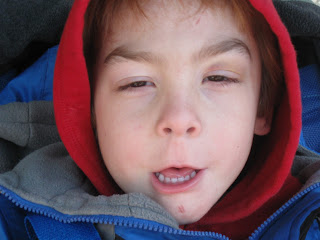 Ben has had a rough couple of weeks between his finger getting caught on something at school causing much commotion in his classroom, a fall at his PT therapy session leading to a black eye, scratches on his head and chin from some other mishaps and ending this past Friday with a trip to the ER in NY when Ben fell off the sofa at his grandpa's house and cut open his already beat up chin.

I may have mentioned before that I do not like blood. I need to clarify - I steer clear of the red stuff when it is outside the body. At a neighborhood Halloween party, I heard crying. I ran to see if it was Sean, my youngest. I was correct, it was his cries I heard. As soon as I saw the blood all over my son's mouth, I took an about-face and headed for another room in the house, letting my husband assess the damage. Luckily, Ryan is the only one who saw me avoid my screaming bleeding child.

When Ben got hurt in NY, I was still in bed. Ryan called up to me for help. I assumed it was a bathroom issue that needed my expert assistance. As soon as I got to the bottom of the stairs and saw the blood, my brain turned to mush. Ryan is the resident crisis handler. He knows that I am not the person you want around when blood is present and decisions need to be made. At the sight of Ben, I immediately averted my eyes. If I saw the cut, I knew I would faint. Ryan issued orders for me to get things together for a trip to the hospital.

Since Ryan and I have been together, he has teased me mercilessly about a scar I have on my right wrist. It is a half-inch cut with the imprint of the 3 stitches used to hold the skin together. For years, he would repeatedly ask me what had happened. Every time, I would tell him about the mole I had removed when I was a kid. My mother took me to our family physician to get a "dangerous-looking" mole removed. The memory is so clear in my mind - I can still feel the blood dripping down my wrist and seeing my mom sitting with her head between her knees so she would not faint. Each time I have had to tell Ryan the story, I work to convince myself that, way back when, it was normal to have the family doctor cut out your mole, sew it up,  and leave a very large scar for a very small mole.

Ryan leaves for the ER and his only knowledge of the health system on Long Island is of my wrist and that family physician. In comes Egor, the physician's assistant. Later Ryan describes him in full detail to me - tall, thin with high shadowed cheek bones, with the accent you would expect from a man with a name like Egor. And Egor's first words are, with all the inflections you would expect from a character right out of a vintage thriller movie, "I am here to take care of your son."

This reminds me of a vacation we took to San Francisco in 2002. Coincidently, my stepbrother and his wife had their first child while we were there. We went to the hospital to show our support. As we visited with the new parents, a medical professional walked in and with heavily accented English said, "I am here to take the blood of your baby." You can see how this memory pops into my head.

Why Ryan does not run fast from Egor, I do not know, because Ryan tells me, after the fact, that he was seriously concerned for the safety and welfare of Ben. Let me stop there - I do know why Ryan did not run from Egor, a train leaving for NYC was only hours away. Our brother-in-law had tickets to a basketball game at Madison Square Garden and Ryan was not missing it for anything.

Ben came home with 4 stitches that, in my non-medical opinion, are messy, spread way too far apart and look like they were done on the fly by Rambo.

As for Ryan, he made it home just in time for our brother-in-law to pick him up for the game. Steve's words at the door were, "Ryan, I am Calgon, here to take you away." And away they went...