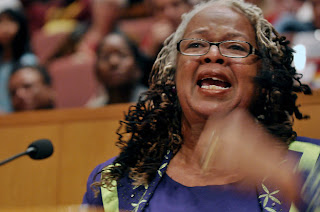 One of the first mornings I arrived at Ben's camp this summer, a man was out front of the recreation center on his cell phone. He was in a wheelchair, but managed to open the door for us. The next several mornings, he was outside when we arrived for drop-off. I later learned from him, that he waited each morning for us so he could help me. He also was there at pick-up time, but inside the building working with the teen camp located there. I learned that his name was Felix.

It became routine for Felix to open the door for us and keep an eye on Logan and Sean. We became friends in the way you do when you see someone twice a day, everyday, for 7 weeks. We talked, shared pleasantries at first, and then got into more meaningful talks as the summer progressed. Felix is 31 years old and has Spina bifida.

At the same time, the recreation director for the building was also around. At first appearance, she was gruff, unfriendly and had no interest in engaging in conversation with me. Something about her made me want to try.  And I did with little success.

Our vegetable garden this summer provided so much that I brought in baskets of zucchini, peppers, cucumbers and okra for the camp counselors. On one of these occasions, I offered the recreation director first dibs. Although she hesitated, I saw the ice slowly melting. Food does wonders to bridge gaps, hence the saying, "Break bread together."

Blanche Penn, her name, is a remarkable and dynamic woman. She is actually mother to Felix. I ended up spending time with Ms. Penn, learning about her struggle 25 years ago fighting to get her son a fair education. She made it clear that because of her advocacy, she paved the way for parents like me.

On Tuesday, I listened to 117 parents, children and community leaders speak about how the proposal to close schools was unfair, racist and ill-conceived. Ms. Penn was one of these speakers. And she left an impression on everyone. I am sure 25 years ago, when she was fighting for her son, she was a force to be reckoned with, because today, 25 years later, she is fighting for other people's children and she is amazing.

I felt a strong sense of pride knowing that I have met this woman and her son. I can appreciate a small amount of the struggle she has faced.


More about Blanche Penn and the activities she is involved with:
Winners Plus Agency
Gray Fox Cheerleaders
Partners in Policy Making