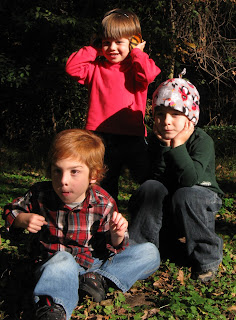 On Veteran's Day, the boys had the day off so we went to the park. There were only a few other kids there with us. While running and climbing on the playground equipment, the other kids got into a name calling contest that involved only one word - "Retard."

I do remember using that word as a kid - I flung it around with words like stupid, idiot, dummy. By the time I was in college, I had more sophisticated shorter words to use, so the "R word" left my vocabulary.

At the park, I thought for a second about saying something to these kids. But what would I say? They saw me with Ben and I don't think they were connecting the use of their word with him. It was something they heard somewhere and were trying it out on each other. I chose not to say anything, but it did awake in me the need for more information about the debate going on about the words, Retard and Retarded.

After looking over the site, it seems that the goal is to end using words like retard and retarded as a way to insult someone or something. The site's supporters are passionate about what they are trying to do. If they are able to raise awareness about mental retardation and get people to stop using the words in a derogatory way, then I support them.

The first time Logan and Sean use those words, because I know they will, I will talk to them about the meaning of the word and how people use it in a mean way. But I will have to do that for a lot of words, because unfortunately, there are so many ways to be mean to someone.