July 21, 2014
Ben's sleeping has improved quite a bit with the recent changes in diet. His hyperactivity has all but disappeared. The last behavior still to remain is his obsession with taking off his clothes and pull-up.

We have become creative in our methods to beat Ben in this "game." For awhile, we were letting him sleep naked, but he had accidents frequently, waking him in the night, so we stopped. Then, we tried long pants, underwear over the pull-up, long johns and shorts, buttoned shorts and the latest, drawstring tied tightly inside shorts; my husband's mastermind. 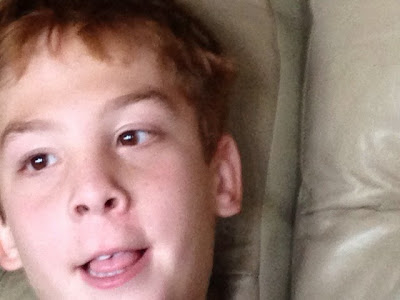 Two night ago, we used the drawstring method and left Ben in his room. Minutes later, he crawled out butt naked. He had untied the shorts and pulled everything off.

Last night, with experience under my belt, I double knotted the shorts and put him to bed.  I have 30 years on this kid, I can beat him at this game and besides, no one beats a double knot.

Ben hung out for a bit on the couch. When he was ready for sleep, I checked his pull-up to see if he was wet. Strange, but I could not feel the pull-up. Did I forget to put one on in my excitement to double knot? No, I clearly remember putting one on him.

Shaking my head and tired from a long day, I walked to Ben's room. On his bed, was the pull-up, intact except for a break on each side.