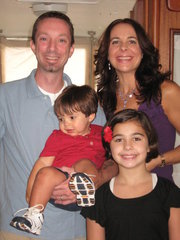 My name is Michele. I live on Long Island in New York with my husband, Rich, 10 year old daughter, Taylor, and 2 year old son, Ethan. I have known Vanessa for nearly 30 years, since middle school. So I have some really good dirt on her. Like when she used to wear skin tight jeans with white “pumps” to school. Well…It was the 80’s! Oh, this is supposed to be about me…Sorry.

Anyway, when Vanessa asked me do write this I was honored. She is an inspiration to me, and she is one of the most courageous, most selfless persons I know. I also thought, “Why is she asking me? Ethan doesn’t really have special needs.” I guess even though I am constantly hounding my husband for being in denial, I have a little of my own at times.

When Taylor was a baby, I left a terrible and abusive marriage with her father. I went back to college to pursue a career as a Special Education Teacher. Little did I know how helpful my career as a Special Ed Teacher would become. I was a single mother, full-time student, full-time student teacher, and worked full-time in a flexible sales job. I said I would NEVER marry again or have anymore kids. Then I met my wonderful husband, Rich, my first year as a teacher at a Teacher’s Christmas party and it was all over!

When we found out we were having a boy, Rich had perma-grin for about four days because he was relieved the playing field would finally be even. He was living with two very headstrong females. Ethan was born and seemed to be a very happy, healthy baby. He even began sleeping through the night at 6 weeks old. Which I felt compelled to boast to everyone!

Little did I know we would be visiting Holland and not Italy.

Beginning at about 10 weeks old, Ethan would often cry uncontrollably, appeared to be in pain and distress and would frequently be inconsolable. The doctor said it was colic, formula allergies, and/or reflux. We switched formulas over and over, tried every acid reflux med and nothing worked. I knew something was not right but the doctors said that some babies just cry more than others.

At 4 months old, Ethan developed a rash all over his body and daily fevers. The doctors kept telling me it was just a “virus”. I knew something was wrong. I kept expressing my concern as to why some days Ethan would appear very swollen and his wrists and ankles would look like balloons but was told he was just a “chubby baby”. After seeing many pediatric specialists, a rheumatologist suspected Auto Inflammatory Disease (NOT Auto Immune) but had never seen a case of this extremely rare disease in her career so she sent us to National Institutes of Health (NIH) in Maryland in search of answers.

Ethan was diagnosed with a very rare Auto Inflammatory Disease known as Periodic Fever Syndrome caused by a genetic mutation. There are many different strains of PFS. All genetic testing has come back negative. Since Ethan’s symptoms are comprised of a few different strains of PFS, doctors suspect he may very well have his own, making it Ethan Disease. I remember Vanessa telling me at the very beginning of our journey with Ethan, not to be surprised if they never find a diagnosis. I thought she was crazy!

Now I know better and look to her for many of my concerns and strength. After trying many different medications, we found some hope where Ethan finally saw breaks from the pain, with a drug that is a study drug and not yet FDA approved.

Ethan suffers from daily fevers that can reach 105, rashes that can consume his whole body, and severe inflammation affecting the entire body, especially the joints, causing arthritis. He has some hearing loss in his right ear. During a “flare up” Ethan often is in pain all day and night, becomes immobile and loses milestones. He receives physical therapy twice a week for the arthritis, pain, developmental delays and significant delays during a flare up. Because this life threatening disease can cause developmental delays, mental retardation, neurological damage, blindness, hearing loss, major organ damage, and amlyodosis he just began a special education program with a nurse on staff.

My hard work to find a doctor that would help Ethan alleviate his constant pain finally paid off. Last month we visited a new Pediatric Rheumatologist in New York City. Knowing that Ethan’s medicine was helping somewhat, he doubled Ethan’s dose and we have seen a considerable improvement in every aspect of his life. I am cautiously optimistic because we have seen substantial improvements in the past that seemed to wear off.  Although, it breaks my heart giving him a painful injection everyday, 10 minutes of pain and torture is much better than him being in inconsolable pain for the majority of his days. Ethan is the sweetest, most loving and bravest little boy I know.

I firmly believe that it’s not the cards you are dealt, but how you play them.