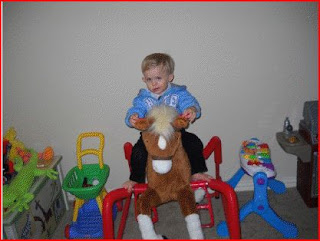 My name is Denise and I live in Texas with my husband, Matt, and our three children: Jason (5 years old), Luke (almost 3 years old), and Madelyn (5 months old). Matt is Vanessa’s cousin from New York. I have been following Ben’s blog every day for about a year now. Having a special needs child of my own, this blog gives me inspiration. I enjoy cheering Ben and his family on during the rough patches and hearing about his latest accomplishments. This is why I am happy to tell the story of my son Luke and his life with CHARGE syndrome.

Luke was born six weeks early after a normal pregnancy which was not unusual since my first son was also preterm. He had to spend some time in the NICU, but appeared to be otherwise healthy and beautiful. During his stay in the hospital, several things were pointed out to us that led us to believe that something was wrong. First it was his ears: low set and smaller in appearance. I didn’t think that was anything to worry about at first. Some people have small ears other have large ears. Then it was the failed hearing screen. I thought that had to be an error; probably due to fluid in the ears. After all, there is no hearing loss in the family. Then it was the holes in his heart that were found after a murmur was detected. Luke wound up staying in the NICU for 3 weeks. I just wanted to take him home and pretend he was a normal healthy baby. That idea did not last very long.

Once we got home from the hospital, more issues appeared and our suspicions about Luke’s hearing were confirmed. We noticed that the right side of his face didn’t move as well as his left side. An MRI and CT scan showed an abnormal facial nerve as well as missing vestibular system (balance). Tests also revealed that Luke had severe to profound bilateral hearing loss and he was quickly fitted with hearing aids. Luke also was also missing several developmental milestones and he was started in physical, occupational, speech, and deaf education services. Several months later we found out Luke also had a dysfunctional swallow. We soon began vital stimulation to help retrain his muscles to properly swallow. He was placed on a diet of puree food and honey thick liquids. Needless to say, it was a rough first year and we had no idea why this was all happening.

Luke’s second year of life was just as difficult as the first. Although it seems like we were finally able to go to the doctor without some new health problem being discovered we knew we had to manage the ones he already had. During this time, Luke had surgery to repair the hole in his heart. He also had a cochlear implant placed for since hearing aids did little if anything at all to improve his hearing. A short time later, Luke underwent a facial nerve graft for his facial paralysis. Our hope is that he will continue to regain movement on the affected side and be able to smile spontaneously.

In researching Luke’s condition, I ran across a syndrome called CHARGE syndrome. CHARGE stands for Coloboma of the eye (which can cause vision issues), Heart defects, Atresia of the choanae (blocked nasal passages), Retardation of development, Growth difficulties and Ear abnormalities. There are also a number of other birth defects that fall under the CHARGE spectrum. A genetic test for CHARGE is available, but since it only picks up 2/3 or less of the children with this syndrome, a diagnosis is made primarily on clinical findings. Luke has 3 of the main components of the syndrome (Heart, Retardation of development, and Ear issues). Luke seemed not to totally fit the profile however a CT scan of his ears showed abnormalities consistent with CHARGE.

After many months of research and seeing several doctors and 2 geneticists, Luke was finally diagnosed with CHARGE syndrome. For us it has been a relief to get a diagnosis and meet other children who have been affected by CHARGE. No two cases are exactly the same and some are more affected than others. We are members of the North Texas Charge Association which has been a good support system and source of valuable information for us.

Today Luke is a happy, reasonably healthy little boy who loves the park and hanging out with his family. He just learned how to walk and loves to practice his new skill. He is able to hear with his cochlear implant and can say a few words (although he doesn’t use them as much as I would like). His favorite word is “No” and he will even point his finger when saying it. Pretty cute , huh! He also had a facial nerve graft last year and is getting some movement of the right side of his face. We still have some minor health issues and multiple therapies to go through but I always look forward to seeing his progress.