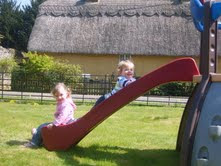 Hi!  My name is Meg.  I'm an American expat living in England with my husband and four year old twin son and daughter.  I have lived in the UK for the past 8 years and have only worked as an office temp in that time (long story), but before I moved to England I worked in Residence Life/Student Affairs.  My last post was Assistant Dean of Students and Director of Residence Life at a private American University in Switzerland.  Now I work 24/7 as a mom/wife/cook/cleaner/playdate co-ordinator/party planner, etc.

When my children turned two, our doctor's office sent us a list of milestones/skills/behaviours that my kids should have accomplished by that age. I read through the list: putting two to three word sentences together, potty trained or showing an interest in potty training, make believe play, etc. and I started to cry.  My husband looked over my shoulder and, attempting to comfort me, said 'Pixie* is doing all of those things'.  I managed a tearful reply 'But Bubbie* isn't doing ANY of them'.  At that point we started having my son evaluated but couldn't get anywhere...the professionals wanted to give him another 6 months to see if things improved.

After 6 months there were absolutely no changes in any of his behaviours, so we were referred to have a number of tests done.  My son refused to co-operate with the hearing test, and we had a fruitless meeting with the speech therapist.  The pediatrician took a thorough history and seemed quite interested to note that my nephew (my husband's brother's son) was diagnosed with Asperger's Syndrome. This got me thinking and I went home and researched everything I could find out online about Autism, Asperger's and ASD (Autistic Spectrum Disorder), but I didn't think it fit my son - some things were certainly spot on, but other things didn't describe him at all.  I put it to the back of my head.

I then proceeded to take my kids to a music and dance class that I thought they would both like.  The first class was difficult, as my daughter was very interested in the class and wanted to participate, but it was set up so that parents and children work together and I spend most of the class running after my son, returning toys, food, etc that he had taken from other people's bags.  Even though it was far from a success, I soldiered on because my daughter really loved learning all the dances.  The second class was even worse, and my son ended up underneath a chair screaming and kicking me.  I didn't know what to do.  My daughter was in tears, I was in tears and I couldn't leave because I couldn't get him out from under the chair.  It was horrible.

A day or so later I had a follow-up appointment with our pediatrician.  She mentioned a charity that ran a playgroup in town for children with developmental delays of all kinds.  She said they hosted a Stay & Play session once a week and she recommended I go with both kids.  I brushed her off saying, that I could not go at that time as I had signed the kids up for the music and dance classes.  When she asked me how the class was going, I broke down and finally realized that I could not go back to that class again and I needed to try the Stay & Play session.  I thought my son wouldn't fit in, and we would never have to go again, but I was wrong.

I saw so many kids suffering with similar issues at the play group - out of control tantrums, speech delay, little eye contact and no imaginative play.  I got to talking to some of the other Moms.  I was repeatedly asked if my son had been diagnosed with ASD or dyspraxia.  I could no longer deny it, my son was most likely autistic and I needed to find out how to best help him.

We continued attending the Stay & Play sessions and eventually my son was offered a place in the pre-school the charity ran.  He stayed there and made some progress until we moved to another part of the country and were forced to start all over.  Thankfully we found a lovely, small pre-school where both kids could go, and they were willing to assist my son in any way he needed.

After about 6 months in our new home, my son was offered a multiple agency assessment which took place over two days.  At the end of it, they informed my husband and I that they were diagnosing my son with Autistic Spectrum Disorder.  Even though I was not surprised, I was upset.  I was glad to have the diagnosis so we could begin helping him, opening doors to treatment, and actually having a name for his challenges, but a grieving process followed nonetheless.

It's been 5 months since his diagnosis and still we struggle with how to help him, how to understand him, how to calm and reassure him.  I have read countless books and always feel so positive and prepared until I'm stuck in the middle of an escalating tantrum, still not knowing how best to deal with it.  There was no magic pill or book or advice given to us to make it all better.  Some days are phenomenally great, some are good, and some are really really hard.  When my son is having a good day, he is the sweetest, kindest, most wonderful child in the world.  And because we have waited so long to hear his voice and understand him, every single new word, phrase or song is precious and cause for celebration.  We are hoping with time and more knowledge, we will be better able to cope and move on from survival mode to a sense of normalcy.

Well, that was very wordy, wasn't it?  I apologize, but I think I needed to write that.

So how do I know Ben, you ask?  Actually I don't know Ben, but I worked with his Mom quite a few years ago.  Thanks to the wonders of Facebook, I have been able to keep in touch with Vanessa and to learn about the struggles and joys she and her husband have faced in helping Ben.  Quite frankly, she is an inspiration to me.  I was very honored to be included in this series and I hope that my words might help someone else out there who might be feeling alone or lost in the craziness either pre or post diagnosis.
*These are my children's nicknames, not real names. :)

Meg also blogs at An American in Jane Austen's England.