Thank You from Kid Charisma

My friend, mentor and former colleague, Roger McGrath, passed away in December. We coordinated a freshman leadership program as well as taught a class together at our local private university. Roger brought a wealth of experience to his teaching from a full military career. He also made it his point to read everything. If you brought up a topic, he knew something about it and would quickly lead you into an argument about the issues, always taking your opposing view. As one person so eloquently said at his memorial service, "Roger would argue with you even if he was violently in agreement with you."

Besides teaching the importance of looking at all sides of an issue, Roger instilled in every person he met, the idea that leadership involves a collaborative effort. His favorite quote was from Lao Tzu, a Chinese Taoist philosopher, who said that when the goal is reached, the people will say they have done it themselves. 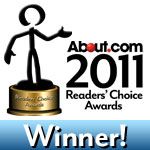 This campaign to gain the About.com Readers' Choice Award for Favorite Special Needs Parenting Blog was the goal. The people who made it happen were many. By the last few days of the contest, I could not go anywhere without people talking about it and how we were going to win. I received emails, phone calls and Facebook messages about how we were gaining votes, percentages and spreading the word. At no time did I feel like I was by myself in this effort. I may have started the ball rolling, but every person picked it up and handed it off to someone else. And this became the way we promoted the site, by continually spreading the word.

And Ben was our leader and inspiration. In this house, we call him "Kid Charisma." Ben's charm is powered by his determination, stubbornness, sneakiness, willingness to keep going, never give-up attitude and down-right funny personality. Without talking or walking, Ben manages to convey what he wants and needs, who he likes, how much love he wants from you at that exact moment to how much he does not want at that moment. He can trick you into anything, and then it is too late to realize it. His laughter, smiles and hugs lets you know that he knows he is loved and that he is happy in this life.

There were too many reasons for people to rally behind Ben.

So here I go, I will try to thank everyone who made this award possible. There is no way I can name everyone because there were endless amounts of people supporting us. If I have forgotten you, please forgive me.

The Family Connection
Ryan was my biggest supporter. He took this and ran with it to all his work colleagues and friends. He made phone calls and sent messages on Facebook. He was with me at 1am when we could not sleep because of all the excitement. He was the person that made this fun. We were definitely in it together.

My mom surprised me as well. She was the creative genius behind some of the ideas we used. I am still glad she did not stand up on the bar of the restaurant to make an announcement about the contest, though. There is something known as going too far, Mom ;)

My Dad is the go-getter in our family. Since birth, he has taught me to find my resources and use them. We held daily strategy calls discussing who next we would contact. I floundered a few times, but he pushed me to make the call. At times, he thought we were all a little crazy, but he still went with it.

Kevin, my step-father, showed his true colors on this one. He has been an unwavering fan of eSpecially Ben from the very beginning, being my second email subscriber. The first being my mom. His devotion to Ben and winning this contest helped spread the word to bicycle enthusiasts across Long Island. His obsession with the contest makes me glad he was on our side.

Francesca, my step-mom, brought the words of eSpecially Ben to all her co-workers at a large company in New York. Her daily reminders to friends and co-workers helped get them to vote and also read eSpecially Ben.

My father-in-law, Jerry gave me the idea to send out a popular blog post with any reminders. This proved to be an effective way to get people's attention who had not had the opportunity to read anything from eSpecially Ben.

Then there is the A-Team: These are the people that stepped up and went crazy getting votes. Every one of them surprised me with their enthusiasm and down right tenacity. Sylvia sent out a Rockyesque message to our core group of people. Mr. Terry had the youth of the church urging their parents to vote and Carolyn was driven by dreams about Ben.
Mr. Terry, Ben's Sunday School Teacher
Sylvia, Ben's case manager
Tim, our next door neighbor and expert Tweeter
Carolyn, our YMCA connection
Joan, Ben's grandpa Kevin's sister

CORE Group
Every day, I sent out an email to 24 people who wanted a reminder to vote. They, in turn, sent the email to more people. I think it had a snowball effect because we started reaching all kinds of audiences. In fact, people were finding out about the contest from two different sources with Ben being the only connection.

Charlotte Homefront
We live in a vibrant city, full of wonderful and caring professional people. We have been fortunate to have the resources for Ben to receive amazing services from these organizations.When we put out the call for support, it was answered with enthusiasm.
Ben's current school
Ben's school for next year
Ben's bus drivers
First Steps Pediatric Therapy
Early Bird Therapy
North Carolina Assistive Technology
Therapeutic Recreation Staff
ARC of North Carolina
Easter Seals/ UCP
Charlotte Public Library
YMCA

NoDa Families - we live in a small neighborhood in Charlotte. All who live here are thankful for the supportive community of neighbors, parents and kids. Whether it was at school picking up kids, hanging out at the park or at the local YMCA, everyone was concerned about the numbers and percentages. Knowing the people with whom we live with care enough to take part in this contest means a lot to our family.

Facebook Family
My Facebook friends who represent people from my birth through the present were a strong force in this race.  I know many did not sign on as my friend or family member to be bombarded with messages about voting, posting, changing their status, telling friends...but most of you acquiesced and helped the cause. We all appreciate it. Someone said it best with, "We knew you were not going away so we just joined in."

eSpecially Ben now has its own page. If ever there is a need to call on for help, this is where I will go for it. I think I have managed to keep most of my family and friends this time, but would not expect to if I were to run a campaign again using my personal Facebook page. If interested, please join eSpecially Ben on Facebook.

Charlotte Businesses
These businesses hung flyers for their customers to see, some put it on their Facebook pages while others sent out emails. Thank you for the support!

OnLine Communities
These groups let their communities know about the contest and, in some cases, added a personal note about why they supported eSpecially Ben. Through these connections we reached many people.
The SITS Girls
5 Minutes for Special Needs
Territory Mom Blog
Blueberry Eyes Blog
Life and Oh La Dee Dah
Charlotte Observer Moms
Pay It Forward
drumSTRONG
CLT Blog
University of Maryland CSP Alumni

About.com
And finally, a thank you to Terri Mauro with About.com. She has been behind the scenes reading all the finalists' posts, writing articles to promote each site and hoping to gain more exposure for every site, eventually raising awareness about children with special needs.

With all this said, what will change now that eSpecially Ben has an award under its belt? Big virtual parties, flashy site, expensive widgets? Although, that sounds like fun, I think we will keep going with what we've got, add some zing and bling when we can and hope people continue to follow us on this wild and crazy journey. Thank you all.