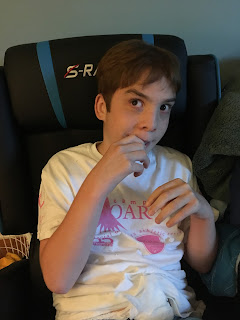 This was written 12 years ago:

More than a week ago, my husband noticed that Ben was falling forward. He banged his head badly on one of these occasions. I was away the weekend, but when I came back, Ryan showed me how Ben was drifting forward while sitting in the bathtub. That evening I emailed Ben's teacher to ask her if she had noticed anything.

In order for the EEG to be effective, Ben had to be kept awake until midnight and awoken at 4 a.m. My sister and I were headed to Washington, DC to celebrate our mom's birthday and I was to leave the day of the EEG. With the help of my husband, and several other kind people, Ben had the EEG.

While on the road to DC, I called many times to find out the results of the test. I finally was put in touch with the technician and he let me know that everything was okay. Relief flooded over me.

The pit of my stomach felt hollow. Here I am in downtown DC celebrating my mom's birthday, not having had a weekend away with my mom and sister, ever. I have to admit I was angry for Ryan calling me. Blissful ignorance for a few days would have suited me fine.
It took me many hours to realize that Ryan needed me not so much to know what was going on but to listen. Ben is his son too, after all. And he'd been up since 4 a.m. dealing with reality on his own.

That night I cried. My sister was there to console me. She said all the right things...nothing. She just listened. I called Ryan. Thankfully, he was still up.

I came home on Sunday as planned. I was glad to see Ben all in one piece. Over the weekend, I began picturing him as a fragile boy. "Seizure" is a scary word, partly because of what it represents, partly because there's so much I don't know.