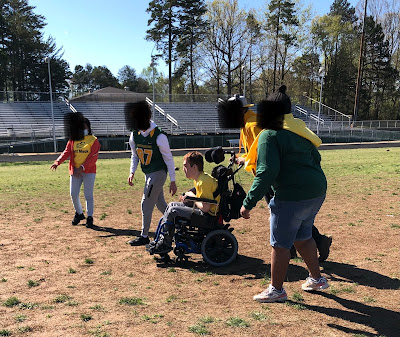 You’ll have to use your imagination for this football game. Too many kids in this video for me to post publicly.
Scene: Ben and his class were invited to participate in a field day called, “Victory Day,” at another local high school. Ben was given a yellow shirt to wear for the day.
Action: The teams are in formation to hike the ball. Ben gets the handoff. A teammate is ready to roll Ben down the field while his teammates block the opposing players. One player leaps at Ben but misses; Ben is rolling too fast down the field.
Ben fumbles the ball but a teammate quickly retrieves it and puts it back in his hands. The announcer yells, “He’s in the end zone!” The players cheer!
Note: Students' faces are blocked to protect privacy.