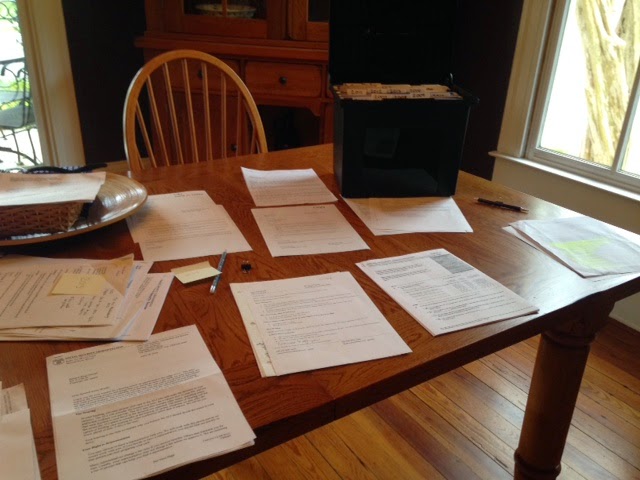 The paperwork mounts as I file reconsideration and waiver forms for Social Security Income (SSI). There are some weeks that I receive a letter from Social Security Administration (SSA) every day, sometimes two come in one day. Next in line for the appeal process is a hearing with an Administrative  Law Judge (ALJ), which I found out today could take up to a year to schedule.

Today, I spoke with a lawyer from the legal aid organization in our state. They have a file on us, but are not officially handling our case. It seems they will jump in after I have exhausted all appeals and waivers. They do offer advice on what paperwork to file and what steps to take to keep our case moving along.

In another arena, Letters of Medical Necessity (LMN) have been added to my paperwork frenzy. Our local management entity, a private agency that manages the state resources for community programs for children and adults with specials needs, Medicaid, etc, has changed. The new company is efficient, organized and requires paperwork to back up any decision. Last Thursday night, I wrote letters to eight of Ben's providers requesting an LMN asap. Without Ben's therapists and doctors' support for services, Ben could lose the help he gets daily.

The time spent on filing papers, writing letters and emails and phoning attorneys and case managers build to a point where I feel a tremendous amount of pressure and stress. For a moment today, I wondered if it was all worth it. What if I gave up, gave in and did nothing to find resources for Ben? What would happen if I stopped therapies, extra help with skill-building and personal care? To me, the answer is bleak: less independence, slower progress and definitely less interaction with others.

I used to wonder when Ben was little, like two and three, if all of the therapy helped him - he made slow but steady progress back then, but I was skeptical of the therapies. I thought that he might make the same progress without people tugging and pulling on him for several hours a day. Because I was not willing to take the risk with my kid we continued.

Now, I have a different attitude. I do think Ben has gained tremendously from all his work with the therapists. In the past couple of years, he has learned so much. He is capable of so much more. He still fights us because it takes a lot of energy for him to do anything, but he can do it and that means something. Ben did not get here on his own, it has been the countless hours of each therapist, community home worker and doctor that have helped him get closer to his potential.