The "Not to Be Missed" Opening Ceremonies 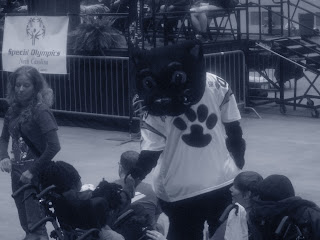 Shamefully, this was my first time attending the opening ceremonies of our county's Special Olympics. I will not miss them again, and I will try to bring a crowd with me next year. Logan, Sean and I were probably 3 out of 20 spectators for over 1100 athletes.

They were spectacular. They did an excellent job of mimicking the noteworthy traditions of the opening ceremonies for the Olympic Games. 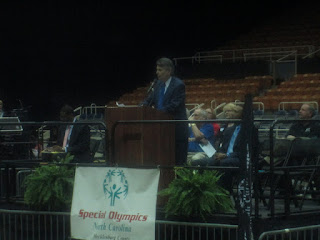 The pomp and circumstance that adds importance to an event was present. The spirit of the volunteers, teachers, speakers and athletes made it exciting and inspiring.


We heard the story of how 30 years ago, David Ball, a teacher, attended the spring games with his class and was so moved by the experience that he convinced the Special Olympics committee to move the games to Charlotte Country Day School. The games have been there ever since. At the ceremony, Mr. Ball was honored, and he immediately rededicated the award to the athletes. I have never seen that done. To him, it was all about the athletes, never about him. 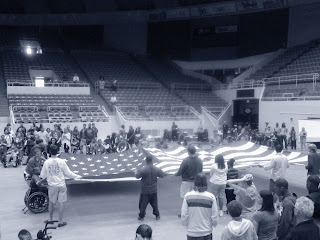 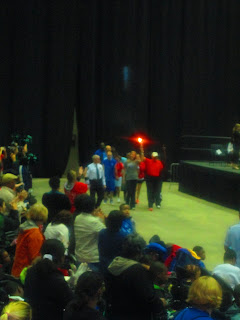 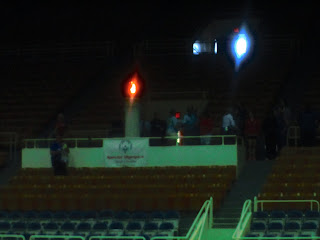 As in the Olympics, it takes great effort to get the torch to the arena for the opening ceremonies. Like many states, the local police and fire departments are responsible for bringing the torch to the ceremony and handing it to a designated person. On this day, it was an older alum of our local special education school. With the help of many people, the torch made its way to the Flame of Hope. In the Olympics, no one can deny the significance of this special ceremony - it was no different on this day, at this event.

Then the party started. Really. Dance music was piped in and everyone danced, and my boys wiggled around a bit. Sean is an exuberant dancer and had me worried he was going to tip Ben over in his chair - it has happened before.

If you have not attended opening ceremonies like this, try it. Bring your kids, your parents and grandparents. Ask your friends, your aunts, your uncles and cousins. I cannot imagine that you would be disappointed.

I am sure cost of transportation is an issue, but I wish the children from a different school in our county could attend every year. They could make posters, banners and signs. Teachers could do a unit on the Special Olympics, differences, special education, community, service, leadership, importance of exercise...the educational aspects are terrific. It would be a learning experience for them and adding 300-600 children to the cheering section would help celebrate the accomplishments of these athletes.