The "Not So Special" Special Olympics 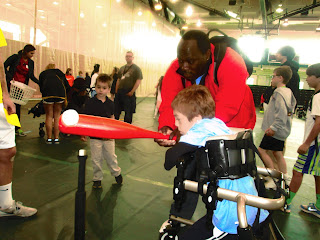 Two days after the opening ceremonies, Logan, Sean and I attended the actual county-wide Special Olympics. It was our fifth year as spectators and we had set expectations: cheering for the athletes, sitting outside at the stadium, watching athletes race by in walkers and wheelchairs and catching up with people we only see once a year.

This year proved different. It seemed that Ben was participating in several events that involved throwing, pushing or hitting a ball. We were inside, isolated in a gymnasium with nine stations. Athletes went through the stations alone (no competition) and needed to complete each one to receive a gold medal. Right from the beginning, Ben knew this was not for him*. It was a struggle to get him to participate.

He was less than enthused about the activities and was not cooperating with the high school volunteers. At one point, Logan was frustrated and whispered to me that Ben could do the event if he (Logan) was the one helping. I am not sure anyone could have gotten Ben to do it - it took all of us to keep him from making a run for the exit.

At the end of the morning, none of us were happy with the events chosen for Ben. They did not fit for him and the worst of it was there was no crowd to cheer him on. Ben is all about the glory. Next year, I will know better and we will request he be a part of the track and field events again, where there is a crowd and excitement.

* I understand that for some athletes, this atmosphere and activities work well.