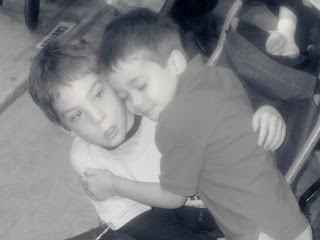 Ryan and I marvel at how each of our sons are getting bigger, stronger and wiser. It usually hits us when one of them falls asleep on a couch and we have to carry them to their beds or they say or do something that catches us off guard.

At two years old, Logan stood up for Ben when their pediatrician did not offer Ben a sticker, the usual prize after finishing an appointment. I could hear the indignation in Logan's voice even then, "Ben needs a sticker too."

This theme of not leaving Ben out has carried through to this day: Ben has a morning "To Do" list, he gets daily Class DoJo points and he has a Reward system too. All of these were prompted by either Logan or Sean. If I do not include Ben, I am quickly reminded by one of the brothers with a "how dare you" attitude.

Logan and Sean take responsibility and ownership for how to get the best for Ben so that he can succeed. They are not afraid to speak up to adults and children. They take pride in showing others how Ben's NOVA Chat or another piece of equipment works. They are the first to tell Ben to do something they know he can do for himself.

At the YMCA, I overheard a boy comment to Logan about some kid at the pool in a special chair. Without missing a beat, Logan claimed Ben as his brother and launched into a discussion about him.

On his own initiative, Logan recently taught Ben to shake hands. Teaching this skill, which was successfully mastered, had not occurred to anyone else in Ben's life.

When someone says something about Ben around Sean, I hear him yell a little loud, a little annoyed, "He's a needs kid. He has special needs." Yah, we all have those and thankfully, Ben has two brothers to speak up about them.


* Disclaimer: All of the above is true; however; I feel it necessary to add that they are still brothers and they fight with Ben too. He gets on their nerves, invades their space and sometimes ruins their toys. He does it knowingly with a glint in his eye and a smirk on his face. He sometimes adds insult to injury by laughing about it too. I guess it is just as it should be. After all, Ben is the oldest brother.