Imp on the Loose 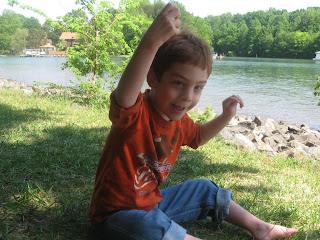 Last time I wrote about Ben's seizures, we were increasing a current medicine to see if it would stop the seizures without having adverse effects on Ben. When Ben became a zombie over spring break because of this new dosage, we quickly activated Plan B and started an entirely new medicine.

After almost three weeks on this new medicine, Ben is not totally seizure free, but he is having them less frequently and his energy level and personality are back.

And to demonstrate that he is feeling 110% - Ben has been repeatedly opening the door to his brothers' room and climbing in bed with Sean. At 11pm. At 11:30pm. And when Ben is told he cannot throw his brother out of bed, he laughs.

So Ben is back with almost no seizures, a seemingly good medicine, and he is up to his old antics again - crawling around the house, standing at counters, climbing on beds, chairs and sofas.

When Sean tells anyone who will listen how Ben threw him out of his bed twice, I sympathize with Sean and quietly give Ben a high five.
Posted by VMI at 7:00 AM