Of course it was raining, not too hard, but the black sky sailed in fast. So many treasured moments unfold under rain. Today the rain fell on my son running the 100 meter race at the Special Olympics. What he actually did was not exactly running – more like walking at a moderate pace, just slow enough to smile at all the people cheering him from the side of the track. Most of the people cheering I didn’t know, but he gets around and he gets known.

Samson really has absolutely no competitive spirit. None. He doesn’t care what sport it is, what kind of ball he is supposed to be throwing. For him, it’s only about the sheer thrill of the instant when everybody’s eyes are on him. Those are his winning moments. When he was younger, on Wednesday afternoons, I would take him to ride horses at a farm for hippotherapy. When the sweet horse would quicken into a gentle trot, Samson would let go of the reigns, his arms waving in the wind. The trainer would stop, of course, but he had his moment. 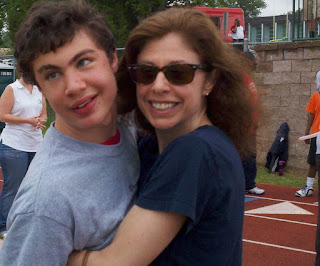 And that’s what it’s really about for him. Living in some second that is all his. I love that about him. He finds his own victories on his own terms. And I smile from the deepest part of my heart.

eSpecially Parents is a monthly series featuring nine moms with amazing stories to tell. To catch-up, read more here.
Posted by VMI at 7:00 AM