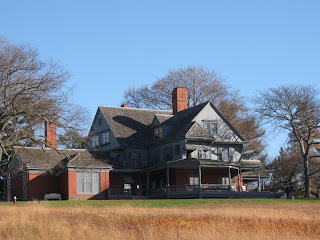 My memories of Sagamore Hill, home of Teddy Roosevelt, are all wonderful. I visited there numerous times as a child, teenager and adult. I have not been back in more than twelve years, but everything is as I remembered it.

When in New York for Thanksgiving, I suggested we all visit. This meant my sister's family with three kids and my family too. We had some concerns about how the kids, all six under the age of seven would react to an old house with a lot of history. We never gave a minutes thought about how we might be received by the Park Rangers. That single omission turned our trip into a memorable one that we will be talking about 10 Thanksgivings from now.

The estate that the house and museum sit on are magnificent. Our kids had a ball climbing trees, running, jumping and chasing each other around. We even hiked a trail through the woods that lead to the beach, something I had never done before. 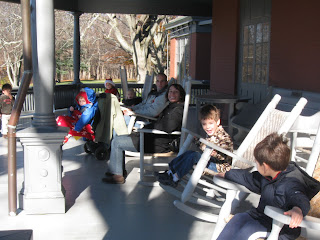 When we arrived at the museum with all the kids in tow and Ben in a stroller/wheelchair, the Park Ranger made it his personal business to see that Ben was comfortable. He awarded Ben with a ranger badge within minutes of stepping into the museum. The other children were given one later, more as an after thought. He also saw that we needed a paper towel for Ben's face and got one for us without our asking. Ben could not make it on the trail to the beach so he stayed behind with Ryan. He was rewarded with two Sagamore Hill patches, clearly an extra only reserved for special visitors. This Park Ranger went out of his way to make our visit extraordinary and we appreciated it.

To view the inside of the Roosevelt home, you reserve a space on a tour lead by a different Park Ranger than the one at the museum. We were signed up for the noon tour. To be fair to the Park Ranger, we were late arriving for our designated time. This was our first offense of many in the eyes of this Park Ranger. We quickly began a downward spiral. Besides being late, Ben's wheelchair through him for a loop - there were no ramps or elevators in the house. We already knew this and had planned to keep Ben on the first floor and swap out adults to stay with him. Although this did not suit the Park Ranger, he could hardly argue.

The first room he showed us was Roosevelt's library - a beautiful room filled with treasures from his travels like a waste paper basket made from an elephant's hoof and three-foot tall tusks decorating the entry way. The children guessed all the types of animals hanging on the walls and draping the floors. Kids being kids, they asked a lot of questions. Logan's questions focused on how everyone died who had lived in the house. Giving the answers to those questions was the only time the Park Ranger seemed happy.

Throughout the tour, the Park Ranger made comments under his breath and directly to us about our group. He was clearly dissatisfied with us. About 15 minutes into the tour, Ryan arrived with Sean. This was the last straw for the Ranger, and he growled, "This is not a tour, this is chaos."

Suffice it to say that the Park Ranger was not sorry to see us leave.

We will forever remember this experience at Sagamore Hill because of our interactions with the Park Rangers, good and bad, caring and comical. And I see us quoting this Park Ranger in times of delightful craziness when kids are inquisitive and active, and we need to make light of the situation.