Be the Bridge Rally 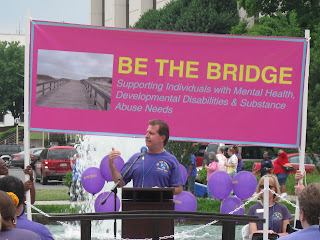 I attended the Be the Bridge Rally last Friday. Be the Bridge is a new organization made up of at least 55 city and county agencies that work with people with mental illness, developmental delays or substance abuse issues. The group's mission is to promote awareness and find creative ways for the public to help, especially in times of budget cuts that can have a devastating impact on this group of people.

Not really knowing what to expect at this rally, I was pleasantly surprised by the turnout of people, the excitement of the crowd and the participation from adults with special needs.

The speakers were motivational, either telling of personal survival or promising support through political and community avenues. The County Commissioner tried a risky move and sang a few lines from a "A Bridge Over Troubled Water." The crowd sang along and a few tears were shed. As the saying goes, 'she was a hard act to follow.'


Many people made creative signs and posters to show support and get the TV and newspaper's camera directed toward them. I also realized that  many of the sign holders were of the population of people this rally was supporting. It was a wonderful way to get them involved in a meaningful way.

Between speakers, well-chosen inspirational songs were played. Sounds hokey, but it really worked with this crowd.


Toward the end of the rally, the planners asked the crowd to do two things:

1. Act - complete the form to the left and turn it in as you leave.

2. March - walk with the entire group to make an impression on the city.

Both were great ideas. It is always good to give people an immediate way to follow-through on promises they make while excited an event. The march was not as well organized and did not have the impact it could have.


The event doubled in size this year and I hope it continues to do so. I did feel that it was a 'preaching to the choir' type of an event. I think it did receive some media coverage, but not enough to create a buzz among people who are unaware of people with mental illness, developmental delays and substance abuse needs. At times, some of the official speakers only addressed "mental illness" and the newspaper articles I read focused on mental illness.

It will take time to build these bridges and increase awareness. I will do my part next year to get a larger group of people there who may not be familiar with the issues discussed at the rally.