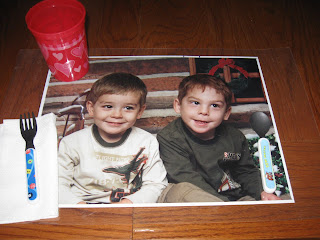 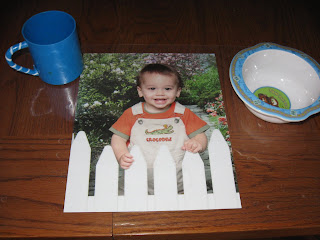 Since Ben was born, I have taken advantage of the photo studios with the low price package specials. They usually include a 10"x13" enlargement. Not knowing what to do with such a large photo, I decided to laminate them to be used as placemats.
The kids love to use these placemats because it is fun for them to see themselves as babies. It is a great way to keep the photos preserved. We also play the game, Whose that baby? The Halloween photo is the most confusing because they are all wearing the same pumpkin outfit.
The lamination was done at Office Max, costs no more than $3. Use their largest size, do not cut it down. Be sure to put the child's name, age and year the photo was taken on the back in permanent marker before lamination.  An 8"x10" photo may be used also - in fact the second placemat has the smaller photo.
When the kids get older, I will allow them to use wipe-off markers to "decorate" the photos adding mustaches, spiky hair and other things to each other's photos.