My mom came with me to Ben's next neuropsychology appointment. We spent a few minutes with the doctor while Ben went off with the two young women proctors and his OT. They also had the NOVA Chat.

I was worried about how Ben would do - he had been up since 3am because of the crazy cab driver and drunken bicycle brawl the night before and performing on command is not usually one of Ben's finer moments. 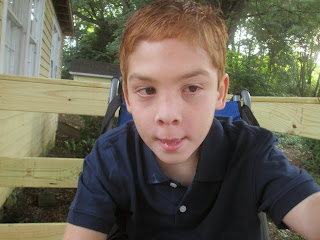 Ben's OT found us in the waiting room about 20 minutes into their session. She needed water for Ben because he had requested some. She said he was doing remarkably well, although they had to ask one of the proctors to leave because Ben's flirting was getting in the way of the testing.

Ben lasted another 20 minutes, for a total of 40 minutes. The OT reported that he shocked the proctors who the week prior could not get anything out of him. Ben was able to tell them what words like bovine, marsupial, and oil can (thanks Bob the Builder) all meant.

The doctor called me 15 minutes after we left to say that Ben did very well. He made it to the vocabulary list that required phonetic spelling for the proctors.

Then she called me a few days later to say that the preliminary results show that Ben's memory (after reading a story, they tested his recall) was in the "Below Average" range. Average IQ is 90-110, and Below Average is in the 80 range. Ben's receptive vocabulary was in the high 70 range.

The doctor also believed that his scores may be even higher because it is hard to get accurate results with the way in which they have to test Ben. They had to modify the test to fit for him. With a verbal person, they would read a story and ask them to recite all the things they remember. With Ben, they asked him specific yes and no questions about the story.

This is all very exciting. We still have another testing session in November. These results only verify what many of us already knew - this kid has a lot going on in his head. Now we will have doctor's recommendations about best education and learning styles for Ben in order to develop an educational plan that will support and challenge him.
Posted by VMI at 7:00 AM