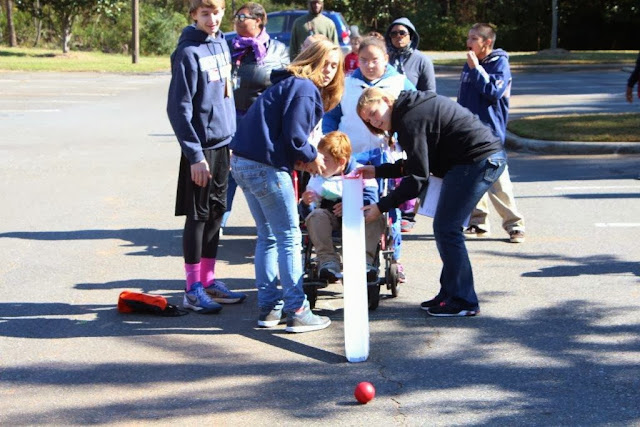 Ben carefully rolled the red ball down the ramp without looking - a challenge he added to the event himself. His eyes were on the volunteer with the hot pink socks, thinking,
"Where can I get me some of those?" 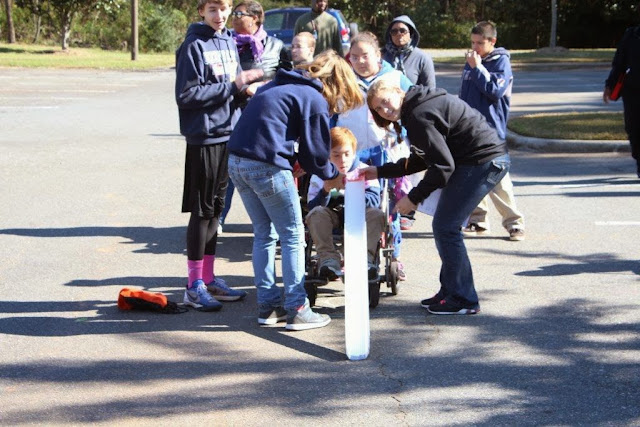 Then, his attention turned to the ramp and looked for where the ball might end up after his big push. Or he noticed the two cute teenage girls hanging onto his every move.

Actually here is the real story: Ben participated in the Bocce Ball event only after waiting 2 hours and Grandma having to ask why her grandson did not get to have a chance.  Supposedly they had called his name and none of us heard it. Ben did not have a medal ceremony which will be a difficult conversation with the brothers. In their eyes, Ben's worth is tied to those medals. They have been holding out for a Gold far too long, in their opinion.

Ben was actually excluded in more ways than not getting his name called today. Because he is in a wheelchair, he was signed up for the ramp Bocce Ball event. None of the other children in his school are in wheelchairs so they all go to another part of the same park for their activities while Ben is left behind.

We are all too familiar with Ben's dislike for participating in sports, with his real interest in spectating. The interaction with his classmates, teachers and assistants are what he most enjoys. Except for an occasional visit from a teacher or old friend, we waited apart from his friends.

The Special Olympics program is, for the most part, run by volunteers and school staff, who have the best intentions and would not leave a child out on purpose. No one is there to be exclusive, mean spirited or hoard all the Gold medals. With that said, when your child or grandchild is left out, it still hurts, no matter the good intentions.

For me, another learned lesson. There are easy remedies, and I am already taking the steps to make them happen for future events.
Posted by VMI at 2:17 PM