It will be almost a year since we started using the NOVA Chat with Ben. It has opened up our minds to what Ben is capable of learning and doing. Ben's neurologist has been intrigued by the device and Ben's use of it. In our spring appointment with her, she suggested we take Ben to a neuropsychologist for testing.

I did not follow-up with this suggestion until  a few weeks ago and lucky for us, they fit Ben in immediately. I knew I was dealing with a different type of doctor when I received an email from her asking if we could talk on the phone about Ben. I was not available to talk because I was working crazy hours at a five day conference in California, so I referred her to eSpecially Ben. I think she read it that night because she got back to me and changed her strategy:

1. We need to use the NOVA Chat for testing 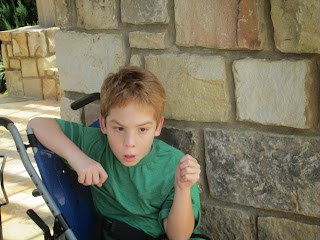 2. We need to get Ben's OT involved
3. We need to do the testing in 30-60 minute increments, rather than the usual 3 hours

At our first meeting, she had a Bob the Builder video pulled up on her computer. She also recommended a few things that she thought would interest Ben based on what she read about him and what I told her about his interests.

Rube Goldberg Machines - I did show Ben this quick video and he seemed interested in what they were doing. I emailed the company to see if they have longer videos of their contests. If the boys want to build one at our house, I think that would be great too.

Frigits - This is something we can get for the house relatively easily. They are not as exciting as the Goldberg machines though.

The doctor also shared a resource that I had not heard of before:

Do It at the University of Washington

This was the first meeting and the doctor did get to see a bit of Ben's personality come out - he gave high fives to the two young women proctors and deliberately did not give the doctor one. Ben did not complete any of the testing that day, but we scheduled a time to come out with the OT.
Posted by VMI at 7:00 AM