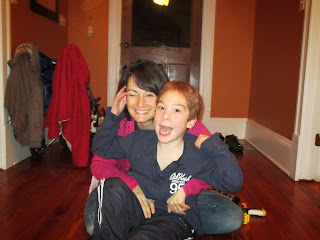 After analyzing several more pints of Ben's blood and little bit of mine, there are still no conclusive results to what genetic disorder Ben may have. Both Ben and I have an odd addition to our X chromosome, but since I also have it and show no delays and disabilities, then it may not be the cause of Ben's own delays and disabilities. However, Ben's neurologist, not geneticist, shared that sometimes a combination of chromosomal issues and other genetic abnormalities can be the cause of a disorder.

During the summer, the geneticist ran a series of the newest genetic tests, ones recently developed in the past 5-6 years. I have not heard anything and assume there were no findings. I did get a $4700 bill that they assured me the practice would cover.

I still stand by my diagnosis - Ben has his own special disorder, unique to him, one they will not find through tests or charts. And the disorder is characterized by sweetness, stubbornness and the ability to stump doctors and occasionally steal pens and personal items out of pockets.