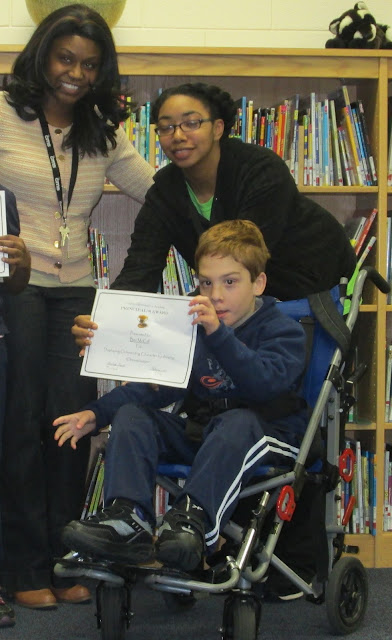 This year, the new principal at Ben's school started an awards program based on character traits such as hope, courage and citizenship. The award is given monthly to a student on each grade level and one child in the Special Academic Curriculum, in which Ben is a student.

Ben received the award for January's Principal's Award based on the character trait determination. The nomination form read: Ben shows determination in everything he does! Whether he is determined to walk down the hall or to sit in his favorite chair, he perseveres. He also shows determination in his work by choosing answers of his choice and working hard until he is successful.

I am proud of Ben and very glad the school includes the SAC program in these activities. I am even more astonished that I caught this photo at the very moment before Ben tried to rip the certificate out of the assistant teacher's hand. He looks so angelic holding his certificate...but if I had taken subsequent shots, a whole other story would have unraveled.