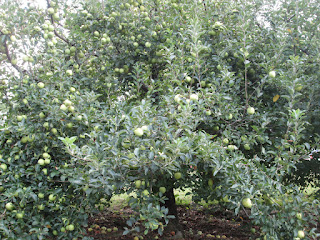 After Ben's big baseball game on Saturday, we drove to the mountains to pick apples at Sky Top Orchard in Flat Rock, NC. It was one of the most perfect days for it - blue skies, not too hot, not too cool. As soon as Ben was out of the car, he found a seat on the grass overlooking the playground and orchards and enjoyed the view. A few times he moved closer to where kids were playing, but for the most part he was content to sit and watch. 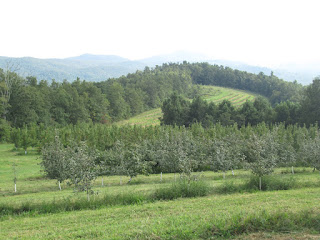 A man who was there with his three grandchildren came and sat right next to Ben in the grass. He asked Ben his name. Ben leaned over to this man, named David, and gave him the most tremendous hug, lasting at least a minute. David's grandchildren walked slowly by, staring, and the man said to them, "When you walk by someone without saying hello, you never know what you might miss out on."

Thanks David for the lesson.
Posted by VMI at 9:33 PM