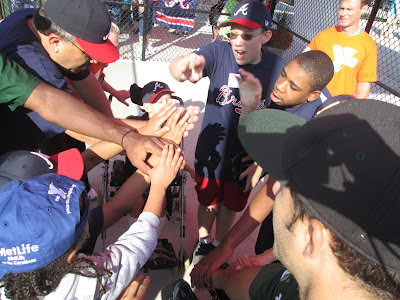 What a difference one week can make. The baseball game was more fun for me, and I am hoping for Ben too. His buddy was a University of North Carolina at Charlotte Baseball Player and he seemed very comfortable with Ben. Ben used his wheelchair and we were able to curtail some of his shenanigans. While in the outfield, Ben spent most of the time trying to get at his Buddy's baseball cap. When Ben was going crazy grabbing at anything around him, I noticed his Buddy give him a quick shoulder rub which seemed to focus him. An OT might have called it deep compression. Whatever it was - it worked to get Ben to turn around and pay attention.

During the week Logan commented that Ben's baseball game was not about winning, but about the players' talents. At 10pm, the night before the game, Sean came rushing into my room with an idea: He just heard a song with the words, "I'm a boy, I'm a boy, I'm proud to be me. I'm a girl, I'm a girl, I'm proud to be me." He wanted the whole baseball crew to sing this song after the game. 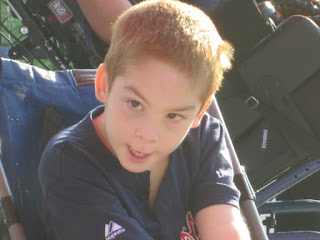 I met another Buddy and she told me about her family's farm, Peacehaven Community Farm. It is a place for people with disabilities to live and work. It sounded wonderful and after checking out the website, I hope we can visit soon. (No, Mom, we are not dropping Ben off.)

Because I was not a basket case for this game, I was able to pay attention. I noticed how the coaches guided the players when they needed it and left them alone when they did not. Our coach wanted his players to experience having the ball pitched to them, rather than relying just on the "T". (For the record, the ball is a tennis ball and even a Nerf ball is used in some cases.)

The best moments were when the players came in from third base to get their run in. Whatever the speed, the crowd erupted in cheers and hooting that would put crowds at some minor and professional games to shame. And when the player did a dance or raised their hands or had the biggest smile on their face as they made their way back to the dugout, I knew all was well at this moment in time, nothing else really mattered, but baseball.

As we left before the end of the next game, one of our friends pointed out that Ben's teammate was the MC. Sure enough, he was calling out the batting lineup, announcing players and adding his own colorful flavor. He was great and it reminded me of Logan's comment about "this being about people's talents."

The effects of participating in this baseball adventure have been far reaching and completely unexpected. I don't think Ben will have a choice about being in the league - we are in too deep to give up now. 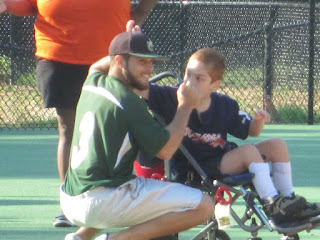