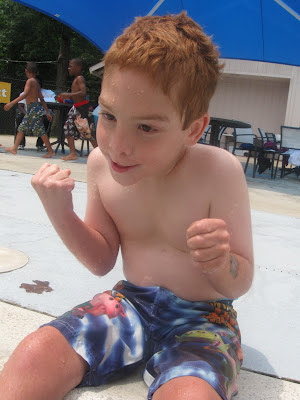 For the first week out of school, I jam-packed it full of fun stuff to kick-off the summer. For the most part, Ben took all the goings-on in stride, but mostly he looked bored and tired.

Finally at the pool, I saw a glimpse of the real Ben,  laughing and giggling.

After finishing lunch, Ben kicked Kim (our long-time friend and community helper) and laughed like it was the funniest thing in the world. Once she caught onto his game, she teased him which made him laugh harder. He was trying to kick her and then push himself backwards in his wheelchair. When Ben slowly inched his foot toward Kim's leg, she'd "yell" at him to stop and that would get him laughing harder. Great fun!

Later Kim got Ben to kick his feet in the water and then splash his hands too. I am hoping this is just the beginning of getting Ben back to where he was before the recent seizures.

Later the same day, Ben had OT with a brand new therapist. She got to see some of his mischievous behavior and quirky personality. To get away from her, he crawled onto the couch giggling the whole time.

These glimpses give me hope that the Ben we know is still there, perhaps just hidden by medication and seizures. We see the doctor this week and I hope to get some answers, solutions or at least a strategy to help Ben. 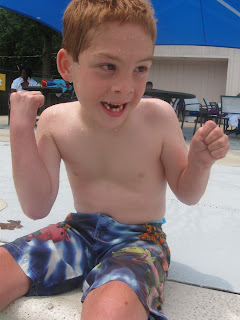