Bound to Do the Job 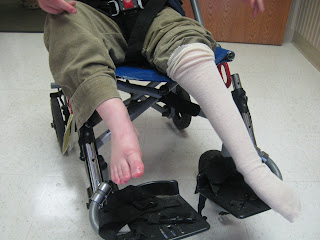 Every six months Ben is measured for new ankle foot orthotics - AFOs for short. The process can take 30-45 minutes depending on how wiggly Ben may be that day. On this day, Ben decided he was going to fight Steve, our long time orthotist, to the death. In the end, we won, but only because I realized we could lock Ben's foot down in his chair while Steve wrapped the other one. Ben lost leverage to push back and some dignity since he was beat.

First, Steve put an open toed sock on Ben's foot. After the rubber yellow band was put in place the entire leg and foot, from the knee down, were wrapped in this very wet tape. 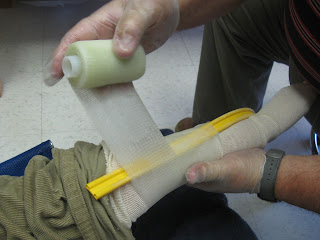 Ben's foot remained in a specific position to get the correct cast. Once the wet tape dried in 5 minutes, Steve cut off the cast using a special scissor, running it down the rubber yellow band, so as not to cut Ben's leg. 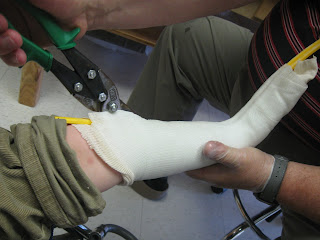 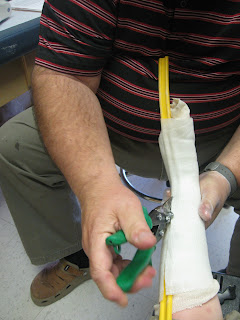 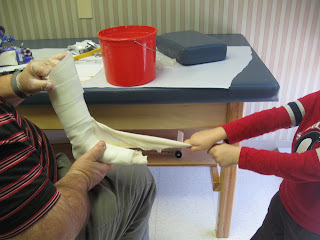 Here's Sean pulling out the sock that was underneath. It was not needed anymore.

The final cast was a good one, despite Ben's best efforts to foil our plans. Luckily Steve is patient and can predict Ben's antics. Next time I will come prepared with a Bob the Builder DVD...which I usually bring, but forgot this time. 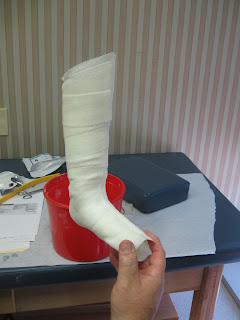 The casts for the left and right feet are used to make AFOs from plastic material. In about two weeks we will return for a fitting and Steve will make adjustments to the padding and toe length. Ben will get new shoes and socks also.

And in six months, we will do it all over again.