Just because Logan turned down the opportunity to be in our church's Christmas Eve Pageant depicting the Story of Jesus, didn't mean that Ben could not be a part of it. Ben was assigned the role of one of the three Wise Men.

The beautiful robe Ben was supposed to wear was off him in less than ten seconds. The crown was a lost cause until we decided to hang it from his walker. We politely asked the people in charge if it was going to be okay if Ben did not wear the costume. They looked at us like we were crazy - of course it did not matter. The show must go on with Ben. 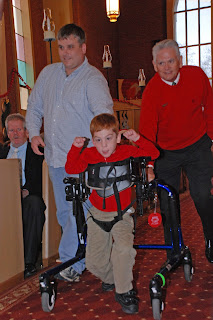 With two escorts, Ben made it down the aisle, up the alter and sat calmly for the pastor's reading of Dr. Seuss's How the Grinch Stole Christmas. Somehow he even wore the crown for this photo (photo below - left corner, sitting with Ryan.)

I was a proud mom. Not just of my son, but of my husband who stayed in the limelight with Ben and mostly of my church for its comfortable nature and inclusive love.

Special thank you to Mr. Terry for these photos. 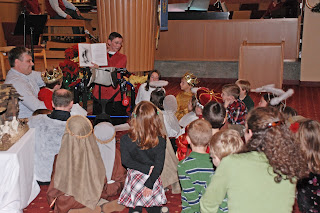