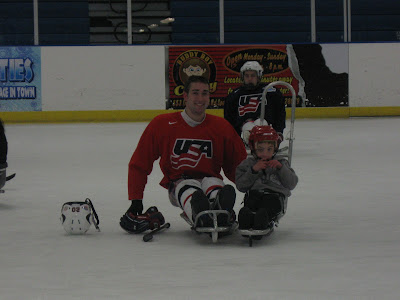 ﻿﻿﻿﻿﻿﻿Last year when we were just observers of Sled Hockey, I wrote about how amazing these athletes were - both in skill and their ability to overcome whatever physical challenges faced them. I brought Ryan along this year and he was astounded by what he saw. He went into the experience with doubts about the sport and quality of the athletes, but after a few minutes realized that his misconceptions were based on bad assumptions. I'd say he did not believe me when I came back last year so excited!

Ben had the opportunity this year to get on one of the sleds and slide around with the Big Dogs. Ben is pictured here with one of the US Paralympic Sled Hockey team members. Ryan made sure this photo happened. Next year, he plans to stage a photo with the whole team surrounding Ben in the goal.

Ben spent a lot of time trying to get the helmet off and his fingers were cold after a few tours around the ice. If he hated it, he would have let us know - so I will assume he enjoyed being out and about. Logan and Sean looked on in envy, only kids with special needs were allowed on the ice. I struggled with them being left out, but reconciled my feelings of guilt knowing that kids get the spotlight at different times and this was Ben's turn.

If you get the chance to attend an event like this one - a practice or actual event of any US Paralympic Team - you will be happy you did so. It is an education for the entire family. There are many "take-aways" after seeing these athletes work their magic.
﻿