Seeing Through the Blur 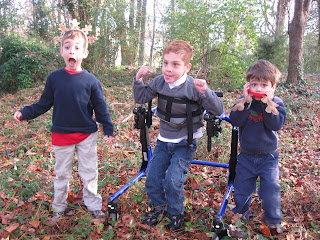 I often find myself wondering about the motions of life - I mean the motions we go through every single day, week, month, year and decade. In a class I taught recently, one of the seasoned married couples talked about how decades have gone by that they do not even remember. Although it is good to know that others feel the same way as me, it makes me want to savor the mundane and notice the little moments. Inside that blur could be the spectacular.

Tonight, after Ben's physical therapy, I decided to treat the boys to pizza at Ben's favorite place. I left Ben sitting at the table while the other boys "played" Miss Pacman. (I do not give them money, they just watch the icons move around and either pretend they are playing or actually think they are playing - not sure which and I don't want to spoil the free thing I have going on.)

The pizza took about 20 minutes to get to our table. Ben waited patiently without complaint. When the pizza came, he remained calm. Ben ate easily and well, moving his hand to his drink when he was thirsty. I can only explain the experience by saying, he was present and in the moment, more so than I have ever seen. In fact, I had the thought that people may be surprised when we stood to leave and he needed my assistance to walk. His behavior was so different - mature, aware and calm.

I stop tonight to relish in this moment, to remember and cherish it. It will eventually be consumed by the blur of holiday festivities.