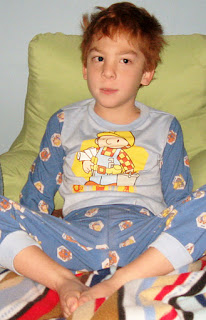 Today was the sleep consultation for Ben. I asked Ryan to go because he had information to add, but really I did not want to seem like a raving lunatic when I described Ben's sleep situation.

I had nothing to worry about with this doctor -  he made no assumptions, asked many questions and walked us through options for Ben. The doctor admitted that Ben's sleep pattern was unusual and offered many explanations and possibilities. He spent 45 minutes with us and probably would have spent more if the kids (and me) had not gotten antsy.

These are a few of the things I learned:

1. Sleeping pills have not been tested on children. It just has not been done. And they definitely have not been tested with children with special needs. I see a future in this area because so many parents deal with their child's insomnia on a regular basis and do not know what to do.

2. It is possible that when Ben was weaned off a seizure medicine called Clonazepam in May, we inadvertently, took him off the sleep aid he needed.  Although Ben was using the medication to curtail break through seizures, Clonazepam is also a sleep aid and it may have been helping Ben get to sleep at night.

3. The doctor offered to do a sleep study with Ben, and he explained in detail what the procedure entails. Let's just say it involves a lot of electrodes on his face, near his mouth, legs and then 20 more on his head. Then an oxygen line is needed in his nose. I kept myself from laughing at the thought of Ben being contained with all those things attached to him. It would be more a study in the adult's reflexes than a study of Ben's sleep.

4. Melatonin, in a small dose, given early in the day, everyday, can be used to help set a sleep rhythm.

We concluded the visit with the decision to give Ben the smallest dosage of Melatonin at 4pm, and then start him on his old dosage of Clonazepam. We will keep in touch with this doctor as well as Ben's regular neurologist. We may have to do a sleep study in the future, but we are going to see how this works first. I am glad to have a plan. I am even happier to find a doctor who seemed truly understanding of the situation and willing to try different methods to come up with a solution.

I started this routine today and as I write this at 8pm, Ben is in his bed, asleep.