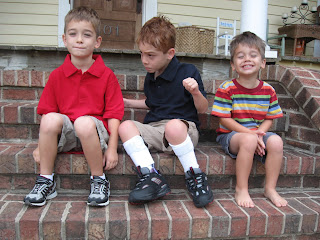 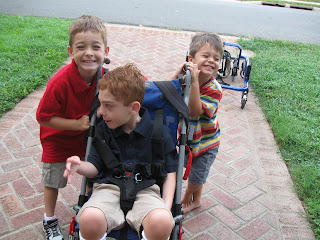 I was not successful in getting the school to allow Ben to walk onto the bus without the Convaid Stroller - at least for now. However, they are meeting Ben at the bus with his walker. According to the teacher and by judging how tired Ben is at the end of the day, I think he is spending a fair amount of time in his walker. One night, Ben actually fell asleep at the dinner table. 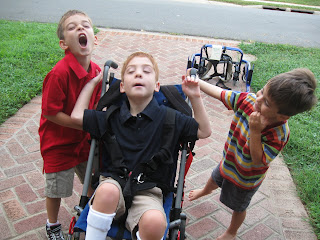 New school & environment, but familiar people are with Ben throughout the day. The principal and assistant principle know Ben from when they worked as a team at his preschool. And the kicker...we walked into Ben's classroom at Open House and the teacher is a friend and neighbor with whom we lost touch after they moved away ten years ago.

I don't know how it happens, but things have a way of working out for Ben.
Posted by VMI at 4:00 AM