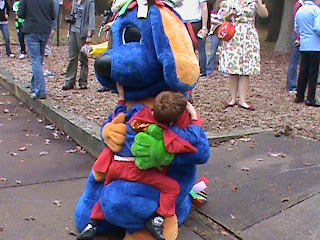 A few things happened yesterday that amazed me. At our neighborhood Halloween Festival, Ben was taking his usual rest from his walker by plopping down on the ground. His 1½ year old brother came up to him and offered his hands to help Ben get up.

Then Raggs arrived. He is a 7 foot tall dog who has his own show on PBS. Ben watches this show often. When it came to Ben’s turn to give Raggs a hug, he would not let go. I mean he really would not let go. Ben was giving Raggs probably the best hug he has ever received. After peeling Ben away, Raggs kept coming back to Ben for more hugs. Their final farewell was sad to watch, Ben did not want to leave.

I was amazed by the kindness that both Sean and Raggs showed Ben. It started me thinking about how many people helped us get through Ben’s surgery and week of recovery. We had friends who picked up Logan from school, brought us dinner and told us to call if we needed anything. Grandparents offered to help. My sister sent a gift card to Ben’s favorite local ice cream shop. So many people sent prayers and good thoughts through phone calls, emails and Facebook. Kim, our own Wonder Woman, made sure she was available the whole week to help lessen our load.

They might not wear a cape, fly through the air or leap over tall buildings, but they are still Superheroes with powers of extra hands, free time, big-heart generosity and extreme thoughtfulness. 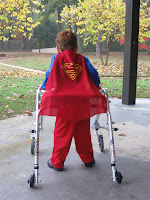 We never felt isolated last week. If we needed anything, we had people all around us who we could call upon. Ben ended up having his own Superhero recovery so it was an easier week than we expected.
Posted by VMI at 11:35 AM