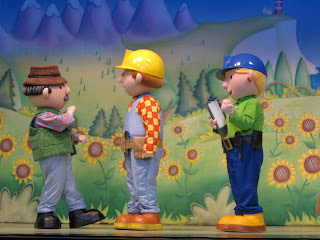 Ben was invited to a Chuck E. Cheese birthday party last Saturday. He was using his walker to get around. Within the first few minutes, I spotted the Bob the Builder/Scoop Ride and led Ben in that direction.

Let me give you Ben's history with Bob and this ride. Ben is the BIGGEST Bob the Builder fan that has ever lived. He owns just about every movie, piece of clothing, bedding and doll, and has seen "Bob Live" on stage. At the last Chuck E. Cheese party he attended, Ben spent two hours on the ride, and he gave Bob a big kiss at one point. I was not there for that party so I wanted to see Ben's reaction today.

I was behind Ben when it all happened, and I was concentrating on him falling that I really missed the steps. My brain was telling me something great happened, but I was having a hard time processing it all within the very short time frame. And I had no one I knew to ask about what just happened. There were many people around, but all were strangers. As if someone heard my thoughts, one of the strangers who witnessed it said, "He took steps."

I wish I had thought to thank the woman who was there for sharing those moments and words with me. If not for her, I would have brushed off the incident as just a fall. I would have pushed it to the back of my brain because I did not really see it all and could not have made sense of it. If not for the kindness of this woman, it would have been a missed moment. I think she knew that this was something to celebrate.