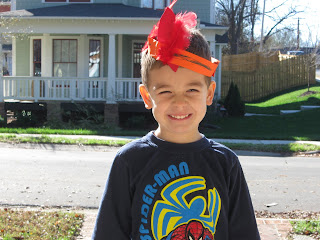 On the Wednesday before Thanksgiving, one of the moms in our family group facilitated a story time and craft project with ten children. The book was about the Thanksgiving Holiday. The mom, a former kindergarten teacher, did a great job of getting each child and parent to tell the group what they were thankful for this year. Children, husbands, family, friends, toys and brothers were some of the things mentioned. My four-year-old was thankful for his bones and the whole world.

The group also sang a song, Ten Little Indians. Then they made Native American Headdress with construction paper, markers, glue and feathers. Although Ben helped make the headdress, he was adamant about not wearing it. Logan, his brother, is modeling it in the photo above.