Hands on the Wheel, Please! 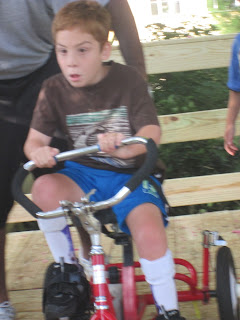 An unexpected perk of having a ramp is that using Ben's tricycle just got a million times easier. The trike is bulky and heavy, making it cumbersome to get up and down stairs. With the ramp in place, it is easy peasy. Now, the trike is stored on the front porch, next to the ramp and is seen as another mode of transportation for Ben. 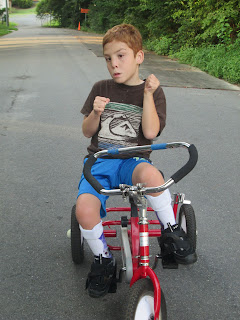 Ben understands the concept of pedaling - something we have worked on for many years. Now, his biggest difficulty is keeping his hands on the handlebars. We have blue tape wrapped around the bar to help him see where his hands need to be placed.

However, he does fight us, and we have to continually prompt him to use his hands. Ben's occupational therapist will do some work with him in the coming weeks. We may also try putting a textured tape or material on the handlebars to entice him to hold on. It was suggested to try the gloves that will keep his hands locked in place. Personally, I think this will anger and frustrate him. I would like to try some other ideas first.

I will keep you posted on how this works. 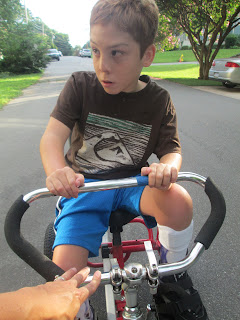 Ben's adaptive tricycle was purchased through AMBUCS, a gift from his Aunt Olivia and her family. It has movable parts so it has been able to grow with him over the last several years. 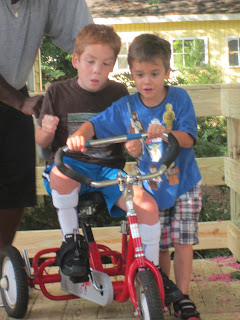 Ben was definitely more motivated to ride on this day when his brothers were on their own bikes. Ever curious about Ben's cool equipment, Logan and Sean couldn't wait to get their hands on Ben's trike. It came in the form of, "how can I help get Ben down the ramp."

Hmmm...I see through these acts of kindness ;) 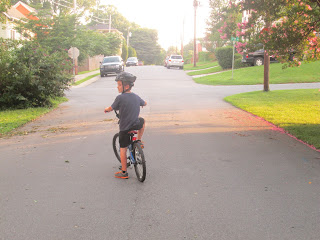