November 18, 2012
We waited six months to receive Ben's NOVA Chat 10. It arrived about three days before the burglary. It sat on the kitchen counter with one sheet of paper covering it. It looks like an ipad. That it did not catch the thieves' eyes, I can only believe it was Ben's guardian angels hard at work.

After many hours of setting up a simple platform we can use with Ben, we started using it just two days ago. We all expected that it may take a year or even more for Ben to get the concept. I believed that if we stuck with the process, he would eventually "get it".

Let me give you a few examples to illustrate what I am talking about. In each of the examples below, Ben was given a field of two choices.

1. Smoothie or Cottage Cheese, Ben chose Cottage Cheese. He ate it, three different meal times. Our "go to" food for Ben is a smoothie. He visits our fridge and we usually get out the smoothie for him. We were sure he made the wrong choice and would push it away. We were wrong...and shocked.

2. Smoothie or Snack, Ben chose Snack. He ate the crackers and milk I gave him. After school, Ben gets his afternoon smoothie. When given the choice, he wanted something different. I may have to retire the blender.

3. Watch a DVD or Sit in Quiet. Ben chose quiet. Ben sat on the sofa for 20 minutes. He can crawl to the TV and get out the DVDs. If he was not happy with his choice, he could have done that, but he did not. 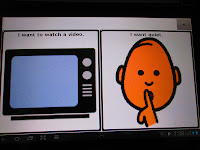 4. Use Walker or Use Chair. Ben made appropriate choices each time at a church gathering. It prevented him from wriggling out of his walker, often causing him to fall and hit his head. I will add real photos of his walker and chair to the device. 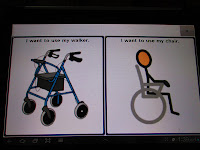 5. Take a Bath or Continue to Use Toilet - Ben chose bath and had a great time floating in the tub.

6. I Need a Break or I Can Do More Work - At physical therapy, he was offered these options and he worked harder than normally after choosing the latter choice. 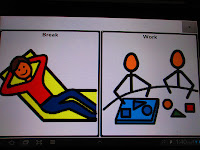 7. I Want a Fig Newton or I Want a Z-Vibe - Ben's speech therapist, a quick learner, made a new page with those two choices. During her session with Ben, he made choices throughout, and very happy to do so.


The system we set up is easy for us and Ben. Anyone who comes in contact with Ben can use the system we have designed. It does require an adult or trained child to use it with him. Our hope is that we can eventually introduce more choices on a page. Right now, we are focusing on using it consistently at home. I hope to start using it in the school setting in January. We will have to build a school system with its own specific choices before we can do that.

At a later date, I will explain in detail how I setup the platform. Right now, I just wanted to share the excitement. This counts as one of those unexpected thrilling adventures.


* A very strange aside: While pregnant with Ben, I got it in my head that we had to name our baby, whether boy or girl, "Nova". Eventually, I allowed new names to be added to the list; however, the name, Nova, was a strong force within me. Hmmm...something to ponder.