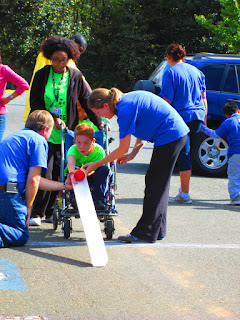 Ben played in our county's Special Olympics Bocce Ball Event yesterday. Lots of athletes, teachers and volunteers were in attendance. The highlight for Ben was having his brother, Logan there. Logan played hooky from school to see Ben participate. 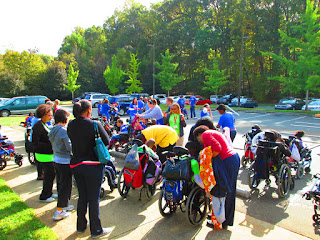 On the way home, Logan made a few observations about kids with special needs - "some are like zombies and some are just normal." He decided that Ben was medium. We also talked about what Logan's friends at school say about Ben. Logan could/would not give me details about their questions, but he said that he answers their questions and then tells them a little about Ben.

I asked Logan if he would ever want to meet with other kids who have brothers and sisters with special needs. Incredulously, Logan said, "Why would I want to do that?" I told him about programs where he could talk about any feelings he may have about having Ben as a brother. His response, "No Mom. I like Ben." I guess that answers it all.

Not having a sibling with special needs, I cannot begin to understand or comprehend what Logan feels, thinks or how he processes his world with Ben. He has been exposed to so much more than I ever was as a child and his emotional awareness is more developed than most kids his age. Any sibling jealousy and anger, love and support is divided evenly between Ben and Sean.

The most disappointing thing of the Bocce Tournament for Logan was Ben taking the Bronze. He was really hoping Ben would at least get the Silver. Basketball and walking events are later this school year - he better start Ben on a training program now.